SATURN : THE NEED FOR FULFILLMENT

The customary interpretive quality of Saturn generally leans towards the negative. Restriction, denial, frustration and disappointment are only some of the terms by which students identify the vibration of Saturn. In this respect, emphasis placed on assisting the client by viewing the qualities in a constructive manner is of vital importance.

It is a mistaken idea to think that constant harmony is a blessing. If music were interpreted in such a way the expression would become monotonous. It is a fact that music has its charm in the relationship of harmony and dissonance interspersed at frequent intervals. Similarly, in this phase of our evolution, the ego could never reach individuality or the realization of the creative potential without the divine discord. One has only to consider the allegorical myths of Faust or Parsifal to appreciate this.

There are as many avenues for experience in the house as there are meanings of the house. If Saturn indicates denial in some form it automatically indicates that fulfillment of that house must be made in some other form, thus unfulfillment must be overcome by direct experience.

Saturn in this instance represents duty:

IN THE FIRST HOUSE:

If Saturn is located on the ascendant it represents the need for self projection or presentation in order to gain the experience required for awareness of self as an individual, otherwise located in the first house it is the need to establish or inaugurate something new, a need for direction and enthusiasm.

IN THE SECOND HOUSE:

IN THE THIRD HOUSE:

The need to understand in depth as opposed to speed, the need for mental action or change.

IN THE FOURTH HOUSE:

The need for a homelife or personal security, the need for emotional freedom.

IN THE FIFTH HOUSE:

The need for social attention and appreciation, the need for confidence and expression.

IN THE SIXTH HOUSE:

The need to make intellectual distinctions for discrimination and definition, in order to realize the value of misdirected energies.

IN THE SEVENTH HOUSE:

The need for relationships and the making of decisions, the need to become aware of the the needs of others,

the need for service as opposed to self.

IN THE EIGHTH HOUSE:

The need to transmute instinctual drives in order to fully realize the potential of the creative force.

IN THE NINTH HOUSE:

The need to learn from improvement and to improve from learning, the need to assimilate.

IN THE TENTH HOUSE:

The need for responsibility and ambition, the need for a role and self establishment.

IN .THE ELEVENTH HOUSE:

The need for friendship and independence, the old versus the new, the need to realize the benefit in giving of self.

IN THE TWELFTH HOUSE:

The native may intrinsically feel Saturn’s forces operating and by “automatically” responding in a constructive manner, make manifest what he feels to be the most out of unfulfilled expression. In this instance a lot of suffering is alleviated.

All these houses are to be defined as areas of operation for the need of security for the individual. It is the controlling influence that Saturn generates which allows the tendency to fluctuate into the opposing house. In other words a native having Saturn in the seventh house may well feel it is operating in the first, and vice versa.

Saturn only respects things in their own essential nature, it is out of necessity that the person is directed to channel these energies in some constructive form. If this alchemical transmutation is not met the result will be the suffering we call frustration.

The frustrating effect of Saturn is shown by the classical astrological angles: the conjunctions, squares, and oppositions it makes to other planets. In this respect the afflicted energies (planets) have to express themselves in a constructive manner to be realized. It is the other Planet that must conform to Saturn’s requirements from expression in its own house to that of Saturn’s. This can be interpreted as previous acts having the cause of unfulfillment effected in this life as though there had never been an interruption. The Karmic aspect.

The scope of physical existence is dependent on the law of cause and effect, to allow unfulfillment and duty to be ultimately resolved. Only in this manner is progress possible. This and many other natural laws are working for our ultimate good. By recognizing the beneficient purpose of these companions we gain a fuller and more rounded view of life which marks the commencement of a secure foundation and true development.

Fear is our reaction to any threat to our sense of security. Unfulfillment represents insecurity; the alchemical process for unfulfillment is constructiveness. The tendency to cling to friends, families or convention is based on fear of standing alone. We obey convention because we fear to follow the dictates of the inner voice that urges us towards the higher things which are incomprehensible to the majority of people. It is the pain that is felt through fear, which is the memory of regret. Thus fear is the chief obstacle which prevents us from getting at the truth and living it. Yet temptation is necessary for the growth of humanity. By exciting the weak points, it evolves conscience and develops the moral nature, the prescient for virtue. It is this saving note of dissonance which forms the potential for individual progress.

“An ancient symbol of the perfected and regenerated man whose divine nature shines forth through a chain of purified and unfolded vehicles. As the rough diamond is dull and lifeless when first removed from the black carbon, so the spiritual nature of man in its “fallen” state reveals little, if any, of its inherent luminosity. Just as in the hands of the skillful lapidary the shapeless stone is transformed into the scintillating gem from whose facets pour streams of vari-coloured fire, so the lathe of the Divine Lapidary, the soul of man is ground and polished until its reflects the glory of its creator in every atom. He who possesses the philosophers stone possesses truth, the greatest of all treasures, and is therefore rich beyond the calculation of man; he is immortal because reason takes no account of death and is healed of ignorance – the most loathsome of all diseases. The Hermetic stone is Divine Power, which all men seek, but which is found only by such as exchange for it that temporal power which must pass away. To the mystic the philosophers stone is perfect love, which transmutes all that is base and raises all that is dead.”

I offer this small diagram as an aid to understanding: 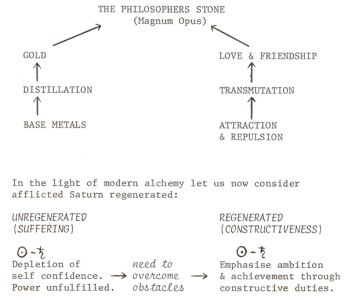 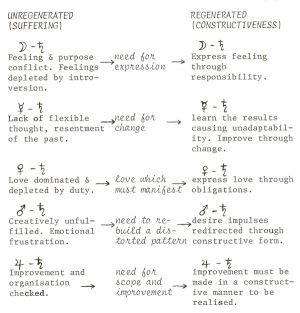 As in all these afflicted aspects, the possibility to overcompensate is always present, care should be taken to allow room for further improvement to gain benefit from all earthly support.

It is observable and psychologically proven that the impulse of love provides the most satisfactory basis for the fulfillment of responsibilities. If love forms the basis of our attitudes, we find resources of greater courage and deeper faith, the expression of which “lightens the burden”. Moreover fulfillment is made much more complete when a loving, enthusiastic attitude forms the basis of our actions.

The mechanics of relationships provide the student of astrology with a perfect field of research for the study of alchemy or transmutation. It is our duty to learn, develop, assist, and inform. What more perfect expression of service is there? 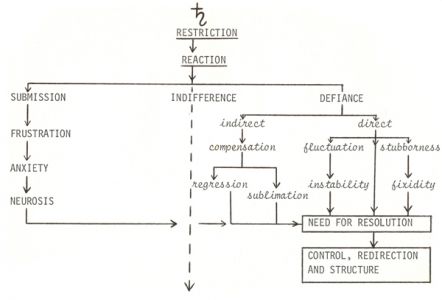