By Mary Orser, and Rick and Glory Brightfield.

Here is a new book, resplendent in its brightly

co loured cover embodying the symbol of the Sun, that

is like a breath of Spring air in the ‘Astrology for Novices’ section.

They have devoted a page at the beginning of the book to explaining the zodiac in a manner that practically anyone could understand why Aries in the tropical system is not Aries in the sidereal system at this point in the ‘evolution’ of our world in relation to the constellations overhead.

No doubt the more scientific of us could reject it on the basis that it is’not scientific’, but then not everyone who has an interest in Astrology can approach it in a scientific manner.

For the person who would _just like to know some

thing more about themselves than what their sun-sign is, this book may be just what they need. The interpretations of the sun-signs, moon-signs, and phases, and planetary positions in the zodiac are simple and

excellent, as is the explanation of what houses are and what aspects are. Then again why pay $50.00

for a mediocre “professionally” done chart when the authors will furnish you with a computer-calculated chart (no interpretation) for just $3.00.

My book, The Crowd Chooses, presents the results of my statistical study of the astrology of horse race betting. In order to introduce my book to you through this article, I will first present a terse technical abstract of my book and follow this with some background about my study.

Abstract of The Crowd Chooses:

Many classical astrological planet patterns’ distribution between the races in which the favorite won and lost were chi square tested to determine if they deviated significantly from chance. The most significantly deviant factor from chance distribution was found in the Moon’s Node from 86 to 96 degrees ahead of the midpoint of Mars and Pluto. This factor was found 150 times amongst the 5044 win races and 143 times amongst the 9459 lose races for a chi square of 35.53 at one degree of freedom. A total of 88 patterns were found deviant from chance expectancy with chi square greater than 20 at one degree of freedom.

All significant factors isolated were interpreted

Much of the raw data is included at the back of the text so that the reader can pursue his own study of the results.

1) The outcome of each race is a definite yes or no: the favorite either won or lost.

2) People from different cultures and times would agree on which horse won, so the results are not bound to a certain time or place.

3) The time and positions of races is accurately recorded and publicly accessable , so my input data could objectively be verified.

4) Large samples are necessary for sound statistical research, the races is a large sample: Thousands of races are run every year.

5) The experiment can easily be repeated and expanded because horse races will continue to be run and accurately recorded.

I will make available to research astrologers around the world the programs and ephemerides I developed through my study. The computer programs developed for The Crowd Chooses are general purpose, they can isolate significant astrological factors from any group of horoscopes.

Those people who wish to apply my research to a betting system can do so by calculating when my significant factors will appear again in the future.

All of my results can be easily verified by hand calculating (no computer necessary) when my significant factors appeared 1966-74. A look at the races that were coincident with the significant factors I found, will show that I’ve told the truth in THE CROWD CHOOSES.

For those of you who are curious about my

astrology-horse racing research but don’t have an astrological background, I’ve listed the sections that will be of interest to you:

17-18 Possible further areas to be studied.

38-99 Read “interpretation” section after the table for each of the 88 factors.

CONCISE ATLAS OF THE UNIVERSE , By Patrick Moore.

The Concise Atlas of the Universe is one of the most remarkable books on the planet today. Never before in the history of man has it been possible to publish a book of this nature. Never before in recorded history has man known so much about the universe around him. This book has been made possible by the development of space travel, super telescopes, and radio astronomy, etc… This book is a record of man and his universe – from the earth to the highest heavens. Accompanied by the most recent photographs in full colour taken from the 200 inch telescope at Palomar, and also from rocket ships, this book stands 11”x14½”, and is 1” thick, with 190 spectacular information packed pages. Not only is it packed with some of the most up to date information, but it is also presented in a visually pisturesque manner. In this book are the findings of the Apollo Program, Mariner 9, Pioneer 10, Skylab – the vehicles that pushed back the frontiers of space.

The first section, “ATLAS OF THE EARTH FROM SPACE, reveals how space travel has caused scientists to rethink their view of our planet. Photographs taken from space present to us a new picture of our planet, showing us many things that were never revealed before, especially concerning weather. Explained here are the astronomical facts of Earth from weather to the magnetosphere, to the Northern Lights. The astronomical data for Earth is given as well as explanations for the tides and the seasons. We see photographs of Earth rising from the Moon, of the phases of Earth, some fantastic photographs of storms and clouds on Earth, and amazing photographs of specific areas on Earth such as the Apollo photographs of Tibet with the curvature of the Earth against space as a back ground.

The second section, ATLAS OF THE MOON, goes into everything about the Moon. All the astronomical data is given along with diagrammatic explanations of lunar phenomena such as eclipses and gravitational effects on Earth, tides, etc…. Included in this section are the actual photographs taken of terrain of the Moon. There are extremely detailed maps of the Moon and accompanying photographs of distinctive features from closer than close-up from right on the surface. The actual lunar latitudes and lunar longitudes of geographic features such as craters, are given in detail. There are even photographs of the backside of the Moon.

The third section is, ATLAS OF THE SOLAR SYSTEM. Here we find all the most recent information you could dream of along with photographic elaboration and graphic descriptions. We are shown the shape of our own galaxy and the position of our Sun in the galaxy. We are shown the relative sizes and distances, and orbital and axial speeds of the planets. Starting with a dramatic description of the Sun, explaining sunspots and their cycles, giving data such as the equator of the Sun and the speed of rotation of the Sun, backed up with coloured photographs of sunspots and eclipses. Next each of the planets are dealt with separately showing the best and clearest close-up photographs taken of the planets to date, along with as detailed a map of the planets surface as is known, giving names of the craters and geographical areas. We are shown visually the relative size of the Earth beside each planet. …it’s remarkable! Did you know that Earth could disappear in the Red Spot on Jupiter? The planetary orbital factors are diagrammatically explained (a useful lesson for all astrologers). Have you ever seen close—up photographs of the mysterious canals on Mars? or the orbits and orbital data on 36 of the more prominent asteroids? Have you ever seen close-ups of the clouds on Jupiter? or of its giant Red Spot which is 25,000 miles across? So much valuable data is given; even the orbital data for each of the 12 moons of Jupiter. Up to date photographs and data are present for Saturn, Uranus, Neptune, and Pluto. There is even a photograph of what may prove to be a trans plutonian planet There is also explanations and data on comets, meteors, and meteorites.

The fourth section is, ATLAS OF THE STARS. (Each section is more astounding than the previous one. The wonders of this book are never ending!) This section explains the motions of the stars, how to recognize them, coloured photographs of them, and the most detailed star maps that I have ever seen. In this section we really begin to get a sense of the vastness of space around us and of our minuteness, however it is so simply explained. The different types of stellar phenomena are described (binary stars, star clusters, nebulas, super novas, and galaxies ).

There are dozens of photographs of different galaxies, maps of the positions of the galaxies in reference to each other (these are a kind of third dimensional map). Shown is the position of the Sun in the galaxy, the local group of galaxies, the clusters of galaxies, and the relation of the clusters of galaxies within the limits of the ‘known’ universe. There is a section on radio astronomy, and on mapping the constellations with a list of the actual position of the constellations in the sky (R.A. & Decl.) There are detailed visual diagrams to show you how to find the constellations amid all the other stars in the sky…. it’s simple and anyone can apply it, taking a little time for the effort.

The fifth section is a CATALOG OF STELLAR OBJECTS. This section may prove to be the most valuable to astrologers technically. Here we are given lists of the exact positions of stars, binary stars, star clusters, nebula, galaxies, galactic clusters, etc…. Not only are the positions given but also the magnitude, size, distance, diameter, and a description. Lastly there is a glossary explaining any astronomical terms used in the book, and a subject index. Words cannot justly describe the value of this book. I have had it for a couple of years now and many times it has provided me with otherwise unobtainable information (for one who is not a professor of astronomy at some university). I cannot recommend this book highly enough. Its cost is only $25.00 and the day will soon be (if it is not already) coming when books like this will sell for over $100.00. I suggest you get it before any further editions are made increasing the price. 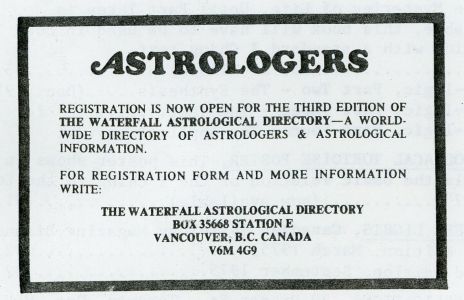