The sequence of the planets allotment through the degrees of the zodiac is based on the speed of each planet  in order from slow to fast. So the order proceeds from Saturn to Jupiter, to Mars, to the Sun, to Venus, to Mer­cury, to the Moon, and then starts over again. This sequence is always followed, however the first degree of each zodiac sign begins with the ruler of that sign, and the ruler of the next degree will be the next planet in the order, and so on down to the thirtieth degree.  The advantage of this system is that it is easy to memorize and easy to access. This makes it highly functional. 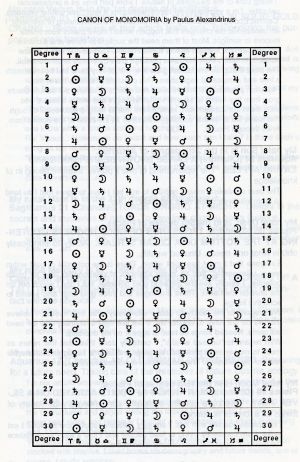 Moira: There is one word that we have not yet attempted to  retranslate, nor could we simply transliterate it into English. It is the  Greek word

‘moira, ‘ which means that part of the zodiac which we call a ‘degree,’ but it more commonly means that portion or allotment which  is one’s fate. ‘Moira’ is the standard term for that division of the zodiac in the writings of Greek astronomers. And from the frequency with which it occurs in the astronomical sections of Greek astrological writings, one might argue that ‘moira’ had come to simply mean a division of the zo­diac, and could be safely translated as ‘degree.’  However, Paulus’ work is too full of word play on this term, and  the related vocabulary of allotment, apportionment, etc., to think that he was not constantly reflecting on its astrological! meaning.  All this is totally apart from the problem that the word ‘degree’ has  an entirely different semantic range than the word ‘portion.’ The Greek term seems to have none of the overtones of ‘step’ or ‘intensity’ that  sound in the word ‘degree.’  We actually tried ‘portion’ in the first draft of this translation, but it seemed to cause confusion in the astronomical sections. Furthermore, it is by no means clear who or what is the recipient of this apportioning.  Is it the child’s portion? The planet’s? So we somewhat reluctantly decided to retain the translation  ‘degree’ for now, contenting ourselves with drawing attention to the  problem.

Horoskopos: This is the Greek term for the Ascendant, although it is not its semantic equivalent. One often hears that it means “view of the hour.” We do not know the origin of this statement, but it is clearly a mis­construction. The word ‘skopos’ does mean ‘view,’ but just as often it means a ‘target’ or ‘marker’ at which one aims. That is doubtless its  meaning here. The Horoskopos is the ‘hour marker.’ This can be either the degree that marks the birth hour, or else the person who does this marking (which is why the Horoskopos can also refer to the astrologer, himself. There is also a verb horoskopeo-which means to mark the (birth) hour.

Monomoiria is a complex word and reflects the ambiguity inherent in  moira at yet a higher level. Where moira comes from meiromai and means a part or degree. moirao was a verb formed from moira itself  after it had evidently begun to lose its abstract verbal force (still in our word  ‘portion’); it meant to portion out or apportion. Moiria is an abstract noun formed from the latter, and means apportionment. Monomoiria, then, could mean either what was already apportioned or distributed to the individ­ual degrees, or the act of apportioning or distributing to individual degrees. Thus, from the present context alone, it is not clear is whether the stars have mastery over the act of apportioning itself, or over what has been already apportioned to the individual degrees. Subsequent astrologi­cal practice suggests that it is probably the latter.

Communication is very important in my work. As a manager, I get my work done through other people so effective communication is essential to the successful completion of tasks, whether it is with people who report to me or with others in the organization Also there is a need to be analytical in my work whether with financial data, with people or with merchandise. I need to know how people think, what will they buy and at what price. I also need to keep up with new ideas and trends.

My Sun is squared by Pluto: In my work I need to be forceful with ideas or with communication. This was particularly true in my last job where I had to change people’s attitudes. I have also found it important to fight for my ideas. This has been critical for my success. My Sun is squared by Saturn: My ideas sometimes run into conflict with people in authority or with those trying to preserve the status-quo…….mm

This degree is ruled by Venus

The need to belong and to be liked or appreciated is very important to me. I have a distinct sweet tooth. This Venus rulership of my moon highlights my capacity for over-enjoyment. I grew up with a special closeness to Mom. I have artistic hobbies and I do place a special value on memories…..ra

My mind can easily exaggerate for effect. When I joke around, things go wrong. I am usually trying to think of and hold to the overview or spiritual way in life. I am very judgmental ….. to an excess at times. I write, teach, and communicate through the media…..ra

I am a perfectionist but I do seem to put a lot of energy into what­ever I identify with. I have learned that a minute’s initiative is well worth many hours of criticism. I have also learned to channel my an­ger into keeping busy at something. In this way some benefits accrue. Even when I am relaxing I tend to be actively doing something. I am competitive, assertive and I tend to get irritable when criticized. ….ra

For me the Monomoiria are an excellent set of symbols. They are not psychic or  blatantly intellectual. They represent themes and ener­gies within each degree and in our lives. The planetary symbolism allows me to make further associations to other areas of my horoscope. What seems very simple at first develops into rather significant depth the more one understands and works with one’s horoscope. ….ra

More examples of Monomoiria can be seen in the article “Murder In The First Degree”. It starts on page 23.