Faces of the Zodiac

from the works of Paulus Alexandrinus 378 AD 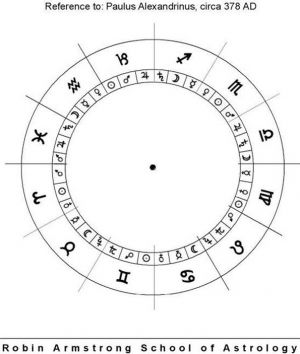 Thanks to the brilliant and dedicated work of Robert Hand, Robert Schmidt, and Ellen Black via Project Hindsight and the Golden Hind Press, we are now able to get scholastic access to the works of early European astrologers. This article represents research evolving from the applications of these ancient techniques; in particular, the works of Paulus Alexandrinus of Greece, circa 378 AD. This is well before the era of Plato and his accentuation on “Logos” or the “Word”. The astrological work of Paulus Alexandrinus places an even earlier emphasis on the concept of “Logos”.

There is in the works of Alexandrinus a sophisticated astrological literacy, a poetic depth and an interpretive lucidity, that challenges the quality and capacity of many a 20th century astrologer. Alexandrinus had astrological or cosmic insight. There is much to learn, and most of it can be easily integrated into modern astrological interpretation. News By Degrees is concerned with degrees and divisions of the Zodiac. It is with this in mind that I have chosen to present the Faces of the Zodiac (or Zoidia as it was referred to by Alexandrinus).

The Faces of the Zodiac are an ancient version of Decan rulership enabling a deeper determination of the 10 degree portions of each sign. Each sign of the Zodiac contains three Heavenly Faces. These Faces are not presented, as the common decan division of the 20th century are, that is by elemental association, but rather through a specific sequence of planetary relevence. Each Face is the Face of a Planet, or the Face of one of the Planetary Gods. The sequence starts from the slower outermost planet of Saturn. From the Father (Saturn) who art in heaven, the meaning of life descends through Jupiter, to Mars, to the Sun, to Venus, to Mercury, and on to the Moon. This is the sequence of the Faces around the Zodiac.

The process of assigning the Faces starts at Aries:

The Faces of the Gods will show pleasure or displeasure depending on its relationship to the Sign it occupies. On the very Face of the Gods we can perceive temperament. The Face judges the Sign. The word or expression coming from that Face will depend on the degree allotment, or “Monomoiria” (refer to News By Degrees, V.1 #2). The degree will accentuate what the Face has to say. The degrees represent one’s lot in life.

The Sun, or Solar Logos, will for ten days, light up each of these Faces in the course of a year. Within each ten day period while a Face is shining, the Solar Logos will empower a degree for each day. The presence of the Solar Logos in a specific degree at the time of birth, determines ones Lot in life! The Solar Logos gives life and power through the divine word expressed by the appropriately enlightend Face. Each specific degree is considered to represent one’s Lot or allotment. This allotment was also called the Monomoiria. Each degree was given a planetary word or presence. These followed the same order as the Faces (Saturn, to Jupiter, to Mars, to Sun, to Venus, to Mercury, to Moon) and the sequences was repeated. The starting point for individual degree determination was that the ruling planet of the sign occupied the first degree of that sign, after which the sequence went into effect until the end of the 30 degrees in that sign. 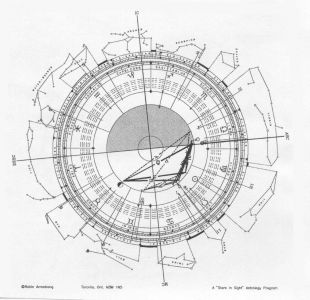 If a Face is comfortable or benefic in a certain sign, it will be a happy Face, content in togetherness and beneficial refinement.

If a Face is not comfortable or malefic in a sign, it will be an unhappy Face that moves towards vulgarity (debased and promiscuous).

The degree allotment will manifest in the facial expression according to its own inclination.

As an example I will use the horoscope of American President Bill Clinton who was born August 19, 1946 at 8:51 AM, CST, in Hope, Arkansas, USA. (Rodden data)

The Face is Mars.

We are looking at a Face of Power in the Sign of Glory. There is an opportunistic expression on this Face. This is a face that will exaggerate power and generate misunderstandings. Mars has a “Go for it” attitude here.

President Clinton is inclined to embrace the use of force to win or prove a point. When in action he will push too far too fast without recognizing his mistakes. He will justify, at least to himself, his every move, but he will make enemies. He overlooks the effects that his actions have on the lives of others. He considers his action to be highly moral. Perhaps he can even stand above the law? ……He is the President!

Witness some of his initiatives: 1. He went ahead with his universal health care policy prematurely and was not able overcome the opposition. 2. His appointments to the courts have been poorly conceived. Faults were overlooked and the appointments by the President were overturned. 3. His sending troops into Somalia was certainly a questionable move. 4. In forcing diplomacy it is sometimes possible to interfere with natural solutions. 5. Perhaps he even forced the United Nations to take an aggressive position in world affairs, jeopardizing the UN’s valued neutral status. Exaggerated action can prevent forethought and wisdom.

The Face is Saturn.

We are looking at the Face of authority in the Sign of Beauty. The Face shows some degree of comfort but it is not smiling. The expression is opportunistic. Perhaps it shows reserved optimism. The Moon while comfortable in Taurus is rarely satisfied by the Saturn Face even when surrounded by abundance. There is an emphatic need for financial and domestic security. It might seem that the best way to insure family stability is through career advancement. There is a controlled abundance here. Comfort is within, defence without. The president may have serious concerns over poverty and famine but he is not likely to personally do without in pursuit of these causes. Clinton has had to impose unprecidented defences around the White House, restricting easy public access.

There is a remarkable ease in relating to the degree meanings (Monomoiria) and Faces used by Paulus Alexandrinus in 378 AD. They are highly functional and adapt themselves to modern use without distortion.

The idea of Solar Logos lighting up the heavenly Faces of the Gods attempting to give guidance through the word to mankind is profound. Having the Faces in the Zodiac, each containing 10 degrees leaves much to reflect on. In particular the life and teachings of Pythagorus (circa 500 BC).

Pythagoras believed that numbers were Gods and he had special meanings for the numbers 1 to 10. Pythagoras was also considered to be the inventor of Phrenology. Thinking further about this and about the evolution of astrological literacy in Europe, one begins to wonder. Perhaps Pythagoras was the very source of the Faces in the sky, and perhaps of even the expressions on the Faces. To jump from the concept of expressions on the Faces of Gods, to the concept of Solar Logos manifesting through the word, becomes quite tempting. Perhaps this concept manifested well before Plato?

Heavenly Faces…… Choir of Angels…… Music of the Spheres…… Pythagoras ……. and perhaps some of the mystic roots of Christianity?