The Age of Aquarius

THE AGE OF AQUARIUS, by Robin Armstrong 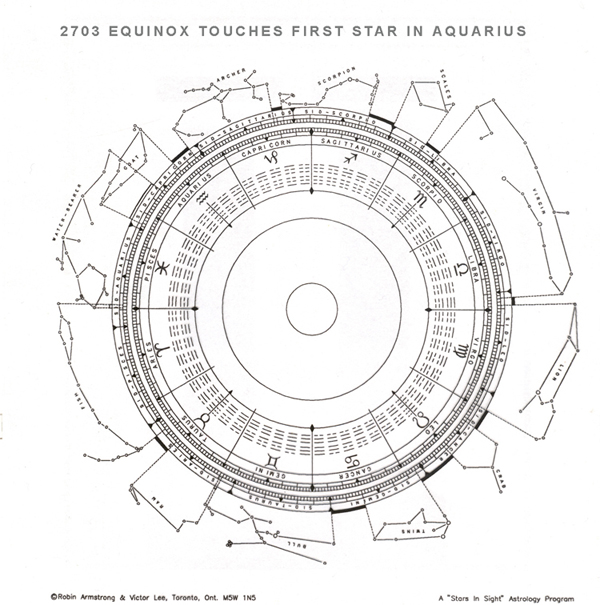 “When the moon is in the seventh house,

(This happens two hours every day.)

and Jupiter aligns with Mars,

(This happens every two years.)

then peace will guide the planets,

(Wisdom will direct the use of force.)

and love will rule the world.

Everyone has heard about the Age of Aquarius. Unfortunately this song is about as distorted as the general impressions are. Aquarius has been idealized as the age of equality, innovation and scientific genius. It has been presented as a time of great excitement and team work; a time of justice when nobody will be left out and the world will be run the way it should be. It is supposed to be an era of great freedom: freedom of thought, word and deed; truly an inspired age. It is supposed to be a time when sexual and religious freedom prevails. It is supposed to be an era of knowledge. It represents the space age and a futuristic society. Many people are joyously announcing the arrival of the Age of Aquarius. Many others believe it has already started. In fact, we have a long way to go before it starts.

The ages are determined by a phenomena called the precession of the equinox. Each year the Spring Equinox moves slightly against the backdrop of the stars. It moves approximately one degree every seventy-two years, or thirty degrees in approximately 2,160 years. It completes a full circle in about 26,000 years. This is known as the great cycle of Zodiacal Ages. This is a rough approximation. The real measurement of an age is marked by the time it takes the Spring Equinox to move through the actual star groups of a constellation. The movement is backwards through each constellation, hence we have the Age of Pisces first, followed by the Age of Aquarius.

When we view the actual stars in each consultation we find that the constellations are of very different sizes. The Ram (Aries) is only 18°, while the Bull (Taurus) occupies 35°. The Twins are close to 18°. The Cancer Crab covers only 10°. The Lion takes up 31° while the Virgin covers 47°. The Scales of Libra only take up 11°. The Scorpion and the Archer each cover 26°, while the Goat (Capricorn) occupies 20°. TheWater-Bearer (Aquarius) covers 38°, and the Piscean Fish take up 41°.

As a result, the length of each Age differs, and no uniform 30° measurement actually applies. The Piscean Age will not end until the Spring Equinox reaches the first star in Aquarius. This occurs around the year 2703.

THE AGE OF AQUARIUS WILL NOT BEGIN UNTIL 2703!

The Age of Aquarius will be an era of true knowledge and science. The Piscean Age is an age of belief and dependency. It was filled with adventure, romance, and religious fanaticism. Knowledge in the Piscean era was and still is based on belief systems and personal judgements. Life has been complicated, filled with prejudice, blind beliefs, and sorrow. The teacher priests of the Piscean Age encouraged the people to become dependent. You cannot find God except through this master, or through this church, but certainly not on your own. Belief systems imposed themselves on individuals. You were either right or wrong. Sex and being in a body was/is sinful. Man was/is seen as the “Fallen Angel”. Sinners need to be saved, Unfortunately the Piscean Age will end as it began in religious fervour and feuding. It will end with the pollution of the waters of the earth, and the destruction of nature………. but we believed we did the right things. Was/is God a living or a dying One? Detachment from life (and sex) and its responsibilities will and has lead the world to ignore pollution until the the very fabric of life is threatened. As the Piscean Age ends so will many belief systems and oversights. New rules will come.

It is easy to see that we are still in the Piscean Age of belief and deceit. No one can agree on global or environmental cures. Even the scientific world is lost in belief systems and refusing to recognize the scope of global pollution for which science is mainly responsible. Technology as a belief system has lead to the rape of the planet and brought the world to the edge of survival. Entire species are dying every day. Will science stop the destructive trend? A simple acknowledgement of cycles makes the need to replenish obvious. Science has kept a blind eye. There is so much corruption and so many lost dreams. The management of this planet is pathetic. Millions of people are starving. Many countries are at war or breaking up just as the need for a new consensus arises. What is health? What isn’t? Who is responsible? Can we avoid regulation? Do we want to?

The Aquarian Age will be an age of knowledge and truth. It will be an era of great responsibility and even greater regulation. Aquarian Age rules will be severe. They will be needed to protect a dying planet by force. The individual’s right to disturb the balance of nature will be obliterated. Unfortunately the Age of Knowledge will bring with it the control of thoughts, ideals, and belief systems. It will be a space age and an era of technology, but this will bring a greater need to organize and rule the planet. There will be a big brother or big sister watching and judging. Group concensus will overide individual impulses and freedoms. There will be equality but we might all be wearing the same uniform. We might not even have a choice of occupation or marriage partner.

The Aquarian Age is filled with ideals and socialistically minded government, but it will be severe and restrictive. There will be a magical team spirit but a lack of individual courage and a lack of personal pride.

Even now in the Nineties we are moving into more and more regulated life styles. Do you think we can afford it? The need for global administration and controls is obvious. Who will protect the trees, the rainforests, the whales, the eagles, the ocean, the ozone layer and the air? Bottled air could be as common in the future as bottled water is today!

The direction is obvious but not pleasant. We, the strong individuals of the 20th Century, will not fit easily into the future. It is important to think about what it all means. We have decisions to make this century ……. now! Do you believe the tide of unrestrained scientific advance will stop? There are difficult times ahead.

Fortunately the Age of Aquarius is still 695 years away. Right now we still need to believe. We need to trust one antoher and work to save the planet. Present information does not seem to be responsible or trustworthy. There are many good times ahead, but right now there are more problems. I felt a need to dispel illusions about the Aquarian Age. This subject matter deserves a book, rather than such a brief presentation. These are and should be sobering thoughts.