We have developed the concept of a degree to include a segment of space, starting at a central point and radiating out from that centre.

We have also added the concept of a degree including 180° degrees or divisions of latitude or depth.

1° degree of equatorial longitude contains an ever expanding volume of space.

The equatorial plain, like the ecliptic, divides the heavens into two hemispheres.

It is created by extending the earth’s equator (rather than the ecliptic) out into space. The equatorial plain is then divided (like the ecliptic zodiac) into 360 degrees.

The 360 degrees of both the equatorial and the ecliptic zodiac each contain a similar volume of space, but they also contain different specific stars.

Rather it moves north and/or south of the equator as it passes through the sequence of degrees. This movement reveals the measure of our seasons. 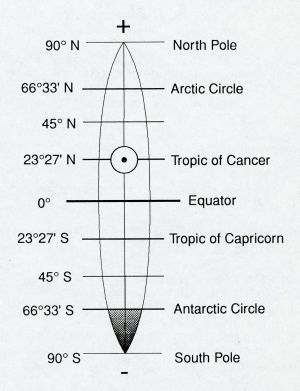 In the spring and summer, the sun will be north of the equatorial plane. There will be more light and heat in the northern hemisphere of earth than in the southern hemisphere. The sun reaches its maximum north declination at 23°27’ on June 21. When the sun is at its maximum north declination it will be overhead at the Tropic of Cancer, just as the sun enters the zodiacal sign of Cancer. In both the equatorial and the ecliptic zodiacs, the sun enters the corresponding sign of Cancer at the same moment. 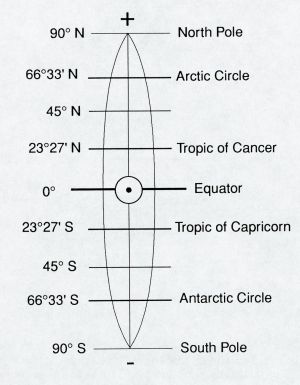 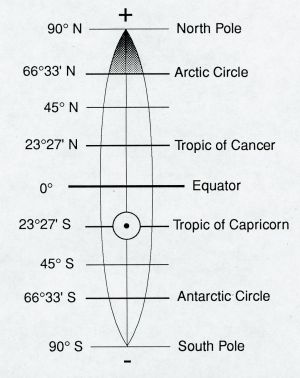 In the fall and winter, the sun will be south of the equatorial plane. There will be more light and heat in the southern hemisphere of earth than in the northern hemisphere. The sun reaches its maximum south declination at 23°27’ on December 21. When the sun is at its maximum south declination it will be overhead at the Tropic of Capricorn, just as the sun enters the zodiacal sign of Capricorn. In both the equatorial and the ecliptic zodiacs, the sun enters the corresponding sign of Capricorn at the same moment.

The beginning of each season happens, at the same moment and with the sun entering the same signs in both equatorial and ecliptic zodiacs. However, this is where the similarities end. Every degree of the equatorial zodiac contains a different portion of space than the corresponding degree in the ecliptic zodiac. 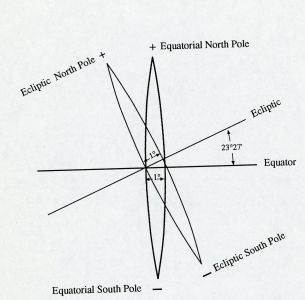 We view the zodiac’s 360 degrees as a circle around the earth whether we use the ecliptic or the equatorial systems. 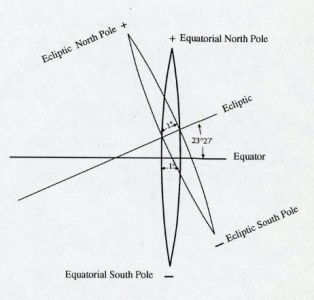 These two circles are at an angle of 23°27’ to each other. It is because of this angle of inclination that the degree substance in each system differs. 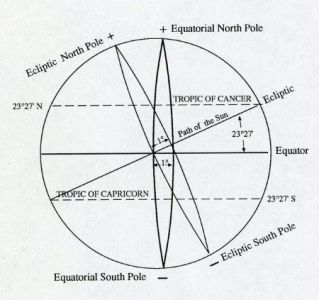 Each degree of equatorial longitude radiates equally 90° North and 90° South of the equator. Each degree stops at the poles. 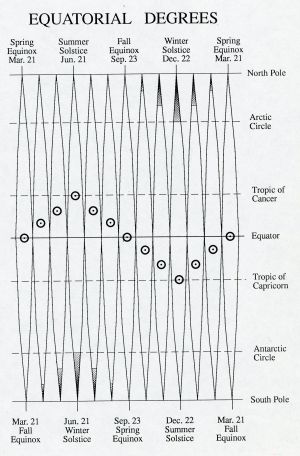 As the Sun moves through the equatorial degrees, it will light up the North and South sectors of each degree un-equally depending on the declination (or season).

It is in the equatorial system that the that the Sun’s influence in each degree is significantly different! 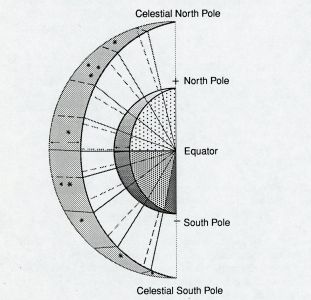 In the equatorial system each degree also contains a unique collection of stars and space matter. The stellar degree considerations in this system, while different, are still equally as valid as those of the ecliptical system.

The time, distance, and heat factors of the sun travelling through each degree will also be valid, though unique, within the equatorial system.

After considering these factors, I am left wondering about the equatorial zodiac and if it is really the correct tropical zodiac! Perhaps the astronomers, in adopting right ascension were more insightful than the astrologers of the time.