This article marks the beginning of a series highlighting the life and works of Canadian Astrologers. We hope through our monthly meetings to evolve these articles into a book on the History of Astrology in Canada.

We appeal to our readers and members for assistance. We are collecting astrologers’ names, groups, stories, conference programs, and even the names of prominent Canadians known to use astrology.  This is a long term project and it is becoming more fascinating every day. 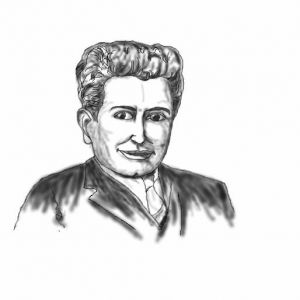 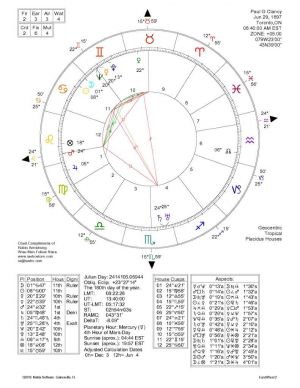 Paul Clancy was one of Canada’s most famous astrologers. He was born on June 29, 1897, at 8:40 AM, in Toronto, Ontario. Our sources are the Sabian Symbols, American Astrology, and Circle Book of Charts. It should be mentioned however, that EST was in effect in Toronto since 1895.  Daylight savings was not used back then but the 75°W time standard was in effect. This forces a correction on the charts previously published as Local Mean Time was used in error.

(The earlier time-change references that they used must have been incomplete and faulty.) The difference is small but phenomenal. It puts Paul’s Mars into the first house rather than the twelfth within 11 minutes of the exact conjunction. On observing his career, one would quickly agree.

Paul Clancy was the Founder and Editor of one of the world’s  best astrology magazines, “American Astrology”. He founded it in March 1933 and was the editor until 1953 when he took ill. His wife, Joanne  S. Clancy successfully took over and  maintained a top quality publication.

I found it  somewhat amusing that the founder of AMERICAN Astrology Magazine would be a Canadian, but on further reflection I realised that an American would not have called it American Astrology!

Paul was a true pioneer. He dared to publish technical material and calculations in the magazine. He included  aspectarians, ephemerides, and serious calculations. He wrote the daily predictions and many other articles. He also had a good sense of humour. Paul embraced challenges and controversy. He would give differences of opinion an equal chance of expression, and let the truth prevail. Controversy can lead to better information and Paul used it to significantly increase the public’s knowledge of astrology.

Paul had a wonderful ability to pull together an excellent team of astrology writers. American Astrology magazine also attracted letters from many prominent mystics and other such characters. Certainly he was the right man, in the right place, at the right time! He willed, he dared, and he conquered.

He was indeed one of Astrology’s top journalists.