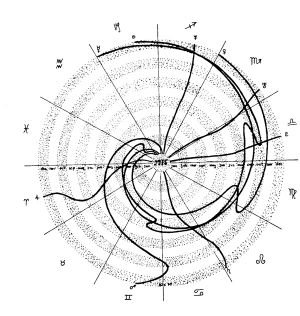 In order to study the astrological happenings in 1975 I have used the ephemeris designed by Andrew Krumins and shown on the accompanying page. It shows the swirl of the planets around the earth and their Zodiac positions throughout the year. The straight radial lines define the Zodiac signs while the expanding rings define the months. For example, Saturn in January is in the sign of Cancer while in December it is in the sign of Leo. (A short meditation on the ephemeris will make the reading of it easier.)

Transiting Jupiter enters Aries in mid-March. Jupiter’s action will be to expand and bring increase on many levels to Aries activities. Mars will retrograde for the first time in two years. This event begins in November while Mars is in Cancer. As Mars moves backwards into Gemini our McLuhan nervous system will undergo some strain. Transiting Saturn which has been affecting our emotional auras moves into Leo in September – from the pot into the fire I Pluto in Libra will continue to bring surface connections which have been dormant or unknown (eg. the transformation in social relationships between men and women). Neptune in Sagittarius will keep us moving, searching. Uranus will electrify much of Pluto’s work. Venus also retrogrades in 1975, starting in August and ending in September. This is another reminder that Venus should not be overlooked in the expansion of ‘Jupiter Transiting Aries”. In December the Sun-Neptune, Mercury-Neptune conjunction point the way to the future. Peace.

Available from the IAO BOOKSTORE, 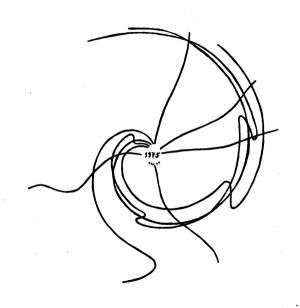