After considerable selectivity, there are two reasons why I chose this chart to present to you. Firstly, the Marten Hartwell plane crash was one of the most dramatic stories in Canadian aviation, and it was a major news item in our communications media for several months. It is an excellent example to dramatize to all astrologers the importance of computing a flight chart before taking a plane, either for themselves or for their clients. It could save someone’s life! For that matter, such a chart is valid for a voyage, a train or bus trip, or any other kind of trip being planned.

Secondly, I feel this chart is an excellent example of a northern latitude chart that does not break down in its delineation with the multiple intercepted signs of the Placidian system of house divisions. The age old debate of house divisions seems to center primarily on Placidius vs Equal House, but one must certainly give equal time to Campanus, Regiomantis, Morinus, Cosmobiology, etc. I am sure there is a valid argument and use for all systems, otherwise so many profound astrologers would not be successfully pulling out their answers.

Many astrologers in the central and southern United States use the Equal House division because, of course, the further south you travel the more the difference diminishes and hence either system would work equally as well. Because of this, the Equal House system has found its way into Canada. Many of these astrologers have admitted that they have had little experience with latitudes in Canada. In the chart I present here we note three sets of intercepted signs all crammed into one polarity point. This in fact, supports the Placidius system as being valid in the north. As Dr. Oskar Zentarra reiterated at the A.F.A. Convention in Dallas in August of 1972, which I had the pleasure of attending, and I quote, “the house is supposed to stand for environmental conditions or the compartments of life, and it is obvious that if we all look back and analyze our lives that our departmental or environmental values, as such, have been unequal in size and embodiment”. Life in the northern regions, by virtue of environmental conditions, is pushed into restricted zones in the chart and certainly subject to delays, hindrances and difficulties because focus must be on survival, self-preservation, and close cooperation with those around you, with a great deal less emphasis on such matters as money, investments, foreign affairs, etc. 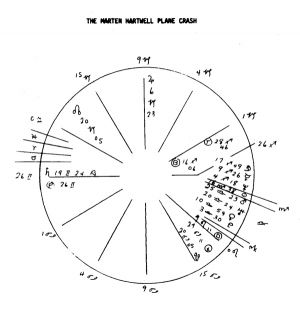 Now, let’s analyze the chart of the flight story itself, set at the precise minute and location that the plane took off on that ill-fated afternoon of November 8, 1972. The small twin-engine Beechcraft 18 left Cambridge Bay, 800 miles north of Edmonton, on a mercy flight carrying a pregnant Eskimo lady Niemie Nulliayok, suffering complications in labour; David Kootook, a 14 year old Eskimo boy with appendicitis; nurse Edith Hill; and pilot Marten Hartwell. Their destination was Yellowknife, N.W.T. and the hospital.

News of the North reported, “Marten Hartwell was bulldozed into undertaking a flight for which he was not technically licensed”. It was reported there was potentially serious icing conditions in the weather, and heavy low flying clouds between Cambridge Bay and Yellowknife.

As reported in the Edmonton Journal, the pilot stayed on course until past Bathurst Inlet, then he found he could not pick up the Contway-to-Lake radio beacon midway to Yellowknife. Before he could turn around and retrace his path he lost that beacon as well. The radio interference was apparently the result of atmospheric conditions known as night effect which distorts radio signals and frost static which obscures transmissions.

“With a 17 m.p.h. tail wind blowing from the east the pilot drifted off course to the west. Then he broke into clear weather and picked up radio beacons from Fort Reliance and Fort Franklin which may have led him to believe he was on course. Suddenly with the weather closing in again, he picked up a radio signal from Wrigley far to the west of Yellowknife.

It was as he was looking for a map to check his position that the plane clipped a tree top with the right Wing and slammed into a hillside.”

Under visual flight rules a pilot must be able to see the ground throughout the flight and if not it then becomes an instrument flight operation. This pilot was Not qualified to fly on instruments alone because he did not hold an instrument rating”. Further

more, Marten Hartwell had said “He was not satisfied with the navigational instruments on his plane. His magnetic compass was unreliable and he was unable to reset his directional gyro.

I include those details in this article, not only to refresh the readers memory of the newspaper stories but also to show the effects of Mercury in this chart.

Now, in a flight chart, the pilot is represented by the Sun and the flight (or craft) itself lo represented by the Ascendant, which in this case is Gemini, ruled by Mercury. Mercury in turn rules delicate instruments and compasses Note its position conjunct the fatalistic and destructive fixed star Antares, which obscures vision in some way, either physically or psychologically. Physically he would have trouble knowing where he was due to cloud conditions, darkness, ineffective instruments, ineffective signals and looking away at the crucial moment. Psychologically one might question his judgement in accepting such a calculated risk in spite of his humanitarian instincts to attempt this mercy flight which, had he refused, might also have been questioned – a difficult position to be in. Note Mercury conjunct Neptune indicating inability to separate logic from illusion

Another interesting point is that Mercury ruled Wednesday and this flight crashed on a Wednesday.

At the departure time of the flight Mercury is applying to, or moving towards, its opposition aspect to Saturn which rules the 10th House of fate of passengers and destination of journey. The ruler of the fate house in a flight chart being Retrograde is an ill-omen (and incidentally if the ruler of the Ascendant of the flight itself is also retrograde it is also an ill-omen), but Saturn is also hidden from view in the 12th House of secrets, as well as being conjunct the violent fixed star Ballatrix denoting liability to accidents. Mercury is also applying to a sextile of opportunity aspect with Venus, one of the co-rulers of both the 6th House of distress and illness, and the 12th of hospitals. This was a mercy flight. This was an opportunity to carry sick people to hospital.

Mercury is applying to a conjunction of the Moon, which rules the passengers in a journey chart. This Moon is on a critical degree and applying very closely to its opposition with the ill-fated position of Saturn and also the Ascendant of the plane. The Arabian Point, Part of Peril sits partile to the ascendant. The Moon is also applying to a sextile of opportunity aspect with the Uranus-Mars conjunction. Uranus rules aeroplanes in general and coupled with detrimented Mars accounts for the opportunity of a sudden and violent accident. The conjunction squares Fortuna on a critical degree. Fortuna sits in the Pisces decanate of Cancer and, according to the eminent astrologer and author, Ivy Goldstein-Jacobson, this becomes mis-fortune.

In an event chart, any planet taking on the degree of the Nodes portends disaster. There are several very strong nodal aspects here but in order to explore them fully we must bring in the Solstice Points, often referred to as Antiscion Points. These are quick to compute and it is simply the planet’s distance from 0 Cancer or 0 Capricorn, whichever it is nearer to, and taken over to the other side of the Meridian. The Solstice Point of Mercury, ruling the aircraft, at 20 Capricorn 34′, is exactly on the degree of the Nodes, while the Nodal Solstice Point at 9 Sagittarius 55′ is exactly conjunct Mercury. The M.C. or fate point Solstice Point at 21 Sagittarius forms a quincunx or re-organization aspect with the South Node. Uranus of aeroplanes is exactly square the nodes, which is particularly ominous being conjunct Mars, as previously explored.

Quincunxes,or inconjuncts, whichever name you prefer, in flight charts are also very ominous and here we have many, particularly through the Solstice Points. I will list them below but first I would like to point out the very powerful YOD existing here. The YOD is a double quincunx with the top part of the Y forming a sextile. This is often referred to as the Finger of God or hand of Destiny aspect. Thyrza Escobar calls the planet making the double quincunx, the action planet, and the point exactly opposite the reaction or release point.

Listed below are other quincunxes, not necessarily part of YODs but ominous none-the-less.

I have purposely left the position of the pilot himself until this point. I calculated this chart on Thursday, Dec. 7, 1972, when the plane was still missing after an intensive search, then in its 30th day. My notes on the chart reads, “pilot still alive”, which seemed incredible considering the 30° below 0 weather in the north country. I showed several witnesses for verification of the validity of astrology in such circumstances. My reasoning was simple. We look to the Sun and firstly note its sextile to Jupiter which is conjunct the fate line. The Sun is also in sextile with the North Node, the top part of the Finger of Destiny aspect but not the reaction point. The North Node sits neatly in the 11th House of Hopes and Wishes in an earth sign. How hoe must have wished he would be found! Jupiter squares both Venus and Pluto, while the nodes square Uranus and Mars but these account for the obstacles in locating him. They are not separative as oppositions would be. Also, whenever I see Saturn Retrograde, tucked in the 12th House, I know there is more to the story than meets the eye.

The Sun is conjunct the fixed star Serpentis, the cursed degree. We all know how this event shattered his career and turned his personal life into a nightmare.

We really don’t require any further proof of this tragedy but will list two other pertinent Arabian Points and their aspects.

Beside my chart I-had written, Moon sextile Venus, Moon ruling 2nd, 3rd, 4th, 5th Houses, Creating opportunity for crash to make him money through communications”. Mercury of communications is Sextile Uranus of Aeroplanes. This didn’t make sense to me at first but as the drama unfolded Mr. Hartwell was offered some quite large sums of money for the rights to publish his story. Since this was a sextile aspect he was free to refuse the offers, which he did after careful consideration.

The plane crash was found on Saturday, December 9, 1972, 32 days after it had crashed. Saturn of course, delays, coupled with its Retrograde situation. Saturn also rules Saturday. It had to be that particular Saturday because Mercury of the flight turned direct just three days previously at 26°Scorpio 18′, forming an exact quincunx of reorganization with the Ascendant We had a New Moon that week on Tuesday indicating new circumstances.

Marten Hartwell was found alive, David Kootook had survived for 23 days, then died a hero, but the Eskimo lady and the nurse died in the crash.

The plane was found 12 miles from Unreachable Lake, which lies in a south-westerly direction from Cambridge Bay. Gemini rules the South-west direction.

Out of every tragedy there must come some good and this one is no exception. As a result of the investigation, navigational aide, facilities and procedures were instituted and upgraded in our northern regions