This article is the second in our series highlighting the life and works of Canadian Astrologers. We hope through our monthly meetings to evolve these articles into a book on the History of Astrology in Canada. We appeal to our readers and members for assistance. We are collecting astrologers’ names, groups, stories, confer­ence programs, and even the names of prominent Canadians known to use astrology.  This is a long term project and it is becoming more fascinating every day. 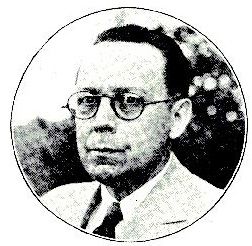 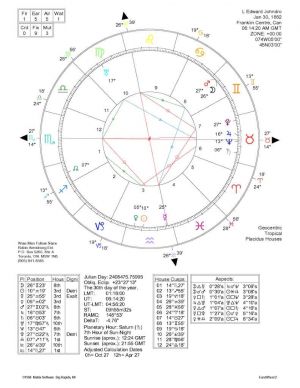 L. Edward Johndro was one of Canada famous astrologers. His promi­nence was from mid-to-late 1920’s to World War II. We have found no reference to his death, but neither have we found any of his articles dating beyond the end of the war.

Johndro is famous on three accounts. First he is the author of two exceptionally well presented books on the stars and how they influence affairs on earth. He was an electrician and maintained that the stars burned beams of energy directly down to the surface of the planet. He further maintained that the moment a planet (like Mars) conjuncted a star that it would have a direct effect on an area on the earth about 15 miles in cir­cumference, where that star was on the Zenith, or right overhead. Depend-ing on which star it could trigger fires, accidents, and various other specific events at a specific time and place. His first book “The Stars” was com­pleted and published in 1929, and many times since. It is still one of the brilliantly scientific astrological books about the stars even among the lit­erature of the 1990’s.

Johndro’s second book, “The Earth in the Heavens” made the cor­respondence between the longitude of the Zodiac in the heavens, and a spe­cific Zodiac for the various geographical longitudes on the earth. In this way he was able to give cities around the world a special horoscope with ascendant and houses based on the stars overhead.

These two books insured Johndro’s place in the history and devel­opment of a scientific astrology that included the stars themselves.

Johndro also developed his own theory of astrological rulerships which was respectably used and/or referred to by astrologers like Charles Jayne and Al Morrison.

Johndro was also a regular writer for Dell’s Horoscope magazine throughout the thirties and into the forties. He also wrote for other astrol­ogy magazines such as The National Astrological Journal. His early writing was solidly based on his theme of astrology, astronomy, radio waves, and electro-physics. He wrote articles about the Titanic Disaster, and on other such mundane or political predictions. He also wrote some fictional stories, published in series in Horoscope magazine, and he began writing more and more about eclipses as he neared the 1940’s. He wrote several articles for the student to learn from.

One of the most fascinating themes that Johndro in his political writing maintained was the life of President Franklin D. Roosevelt who was Johndro’s astro-twin, both being born on the same day and same year. Johndro’s career began to peak as did President Roosevelt’s. It was as if Johndro was writing as the conscience of Roosevelt. He followed Roose-velt’s elections and policies and wrote astrological comments and predic­tions about them. One such article was entitled “Tweedledum and Tweedle­dee”. In this article he compared his life to Roosevelt’s, referring to himself as the “forgotten man”.

Another curious trait of Johndro was to avoid any mention of his exact place of birth. He always tried to imply that he was born in the USA. He left his place of birth off of his personal horoscope when it was pub­lished in the front of his book, “The Stars” (1929). In a Feb. 1938 Horo­scope magazine he published his exact time of birth as 1:18 AM but did not mention the exact place. It seems as though he rectified his chart because there is a slight discrepancy between what was in his book and the time mentioned. We were able to find out in some birth data collections that Johndro was born in Franklin Centre at the extreme southwest corner of Quebec, about five miles from the American border.

His rectified chart is included for you showing an almost exact opposition between his Scorpio ascendant and Neptune. This certainly con­firms his evasive identity and avoidance of being recognized as Canadian. Another thing that we have no reference to is his marital history. His ascen­dant at 14° Scorpio 27’ occupies the I Ching hexagram called “Modesty” … where it is mentioned that the mountain beneath the earth is indeed a modest mountain. To me this is Johndro, a mountain… a Canadian mountain hidden (at least to Canadians) within American peaks.

To close, I leave you with some published self-descrptions in the the words of L. Edward Johndro himself.

“In reference to your request for a biographical sketch I feel like the Forgot­ten Man of these post-1937 times, when the world was supposed to have been recreated, that there is little of interest to note save perhaps as a moral to adorn a tale I may tell later. I was born in a log cabin Jan. 30th, 1882, virtually astraddle the New York-Quebec line, during a mild blizzard that, figuratively, has never quite ceased to blow about me even here in the southern corner of California…. A virulent attack of scarlet fever at nine permanently blotted out most of my memory of previous childhood…. I have been farmer, cheese and butter maker, department store clerk, textile weaver, shoe cutter, steam engineer, mechanic, corporation troubleshooter, prospector and lumberman in the far Northwest, surveyor’s assistant, assis­tant electrical engineer, laboratory worker, versifier, director of amateur dramatic club, co-author of an operetta, would-be song writer, patent coun­sellor, speculator (in both senses), astrological researcher, practioner and author — and what have you. If there are any “isms” I have missed investi­gating and abandoning I do not know of them. While a rolling stone gathers no moss it perforce is impelled and compelled to find its way around — and, anyway, the sole good use of moss is to chink the cracks of a northern cabin. Hobbies: The drama, fishing, chess, draughts and perusal of interna­tional didos both sane and insane.” … by L.Edward Johndro, from Horoscope, Jan. 1938

“And so I, the Forgotten Man, am very, very thankful that the stork, head­ing south before the wintry blast on January 30, 1882, dropped me down at

1:18 AM on the northern New York state border, on that hard and stony farm that taught me much, that he might deliver the Big Boss (President Roosevelt) on schedule at 8.18 that evening at a mansion in Hyde Park on the Hudson.” …by L.Edward Johndro, from Horoscope, Feb 1938