Fixed Stars and The Progressed Sun of Carl Jung-Part 1

Fixed Stars and The Progressed Sun of Carl Jung

Because secondary progressions magnify small areas of the sky and make them relative to the lifetime, they represent a very distinctive and vibrant approach to the fixed stars. With the progressed sun, allowing for a one degree orb, there will be a two year relationship to any star that lies in its path. This will highlight the significance, if any, of the stars in a person’s life, with a time perspective included. The outer planets in their small movements could get closer to or further from a star for a person’s entire life. Mercury, Venus, Mars and Jupiter will have their own relationship to a section of the zodiac and the stars so aligned. Only the progressed moon will travel through all 360 degrees in twenty-seven to twenty-eight years, and potentially three complete cycles in a full lifetime. The progressed sun will travel through about ninety degrees in ninety years.

In this article an example will be made of Carl Jung’s progressed Sun. The conjunctions to any first magnitude stars and a few major aspects will be noted and related to his life. Other progressed factors will be left out.

From conception to birth, nine zodiac signs or two hundred and seventy zodiac degrees are experienced. By secondary progressions the last three zodiac signs or ninety zodiac degrees are experienced. This represents the first complete soulful experience of the entire zodiac and it reveals the destiny that will evolve across a person’s life. In secondary progressions each day after birth holds significance for the corresponding year of life. What happens in the cycle of one day, will create a corresponding pattern across one year.

The movement of the progressed sun reveals the path of the soul across a lifetime and also the personally profound challenges that will evolve and when these challenges peak.

As the progressed sun moves in its allotted path, it will travel through and empower the attitude of three, possibly four zodiac signs. Likewise it will traverse and influence the affairs of four houses, more in polar latitudes. In the process it will interact with the different planetary levels of consciousness as aspects are experienced.

During its journey the sun (soul) will also come under the direct emanation of the unique light of stars. It will also run into and be influenced by other celestial lights such as galaxies, pulsars, quasars, black holes, super novas, the galactic centre, and the super galactic centre. This represents an addition of light and energy to the light of the sun. A little extra guidance, from above, is received.

In the life of the soul this implies something new is available. A new inspiration or vision, a special impression occurs. How much of this starlight is consciously received depends on the awareness of the person and the quality of his or her life. Not everyone will be receptive to this higher light, and not everyone will listen or adjust their lives accordingly. But for those who do, a little extra vision or light will manifest. If only everyone was open to these higher energies!

Many of these factors would be difficult to objectively measure specific effects for. However for the soul on its path, all vibrations, energies, and lights are met with inner presence and may sometimes be experienced intuitively. Perhaps the addition of light from individual star to that of the sun, may provide special insights and perceptions from higher realms. Perhaps they might create eureka moments that could affect one’s life for many, many years. The question arises, “Where do intuitions and flashes of genius come from?”

Perhaps they do come from the stars and other celestial beings. Let us proceed and witness what role the stars, or at least the first magnitude stars might have played in the life of Psychologist Carl Jung. To do this three detailed star charts for the zodiac signs of Leo, Virgo and Libra will be used. Carl Jung is a Leo and these are the three signs that his progressed sun traveled through in his lifetime. 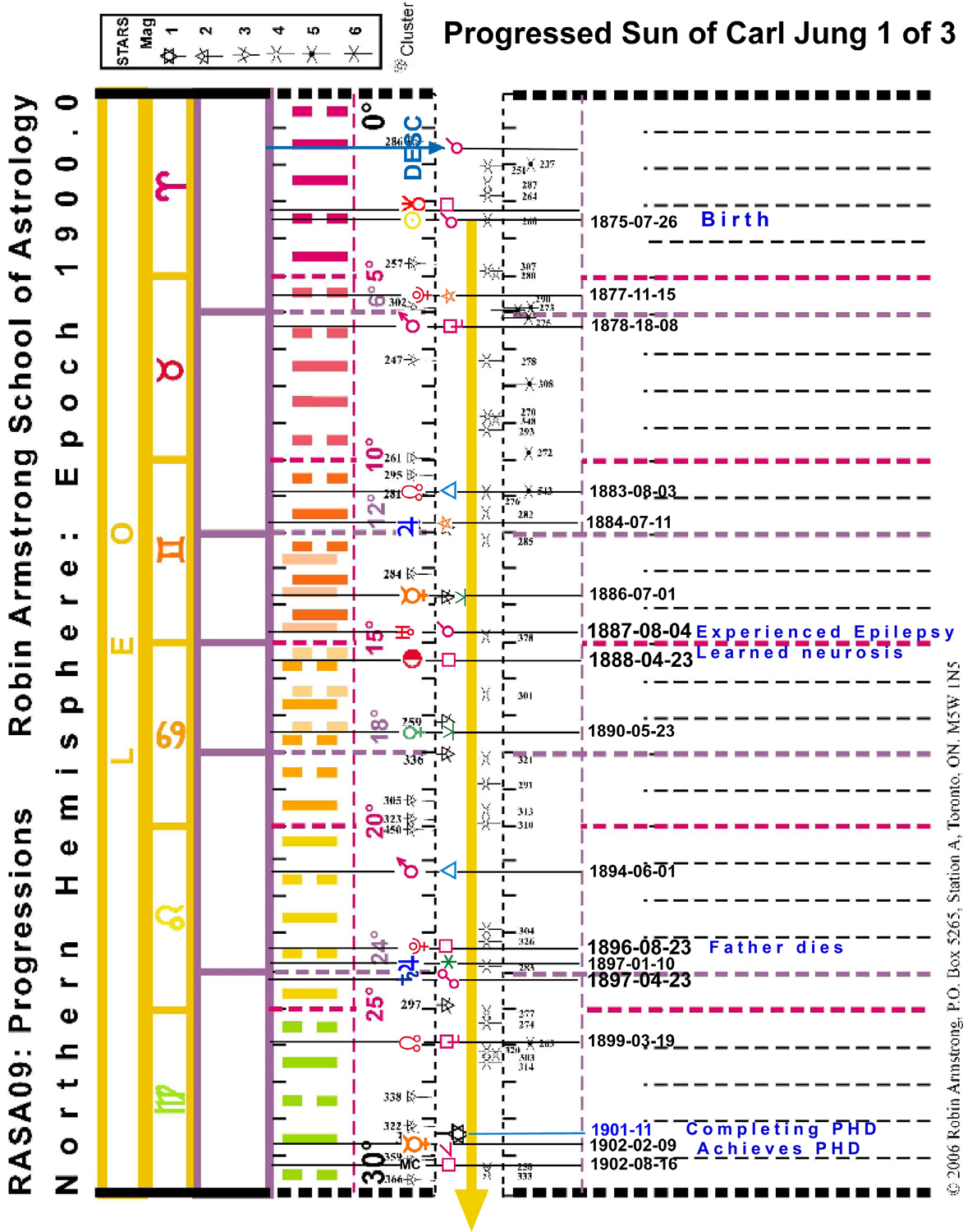 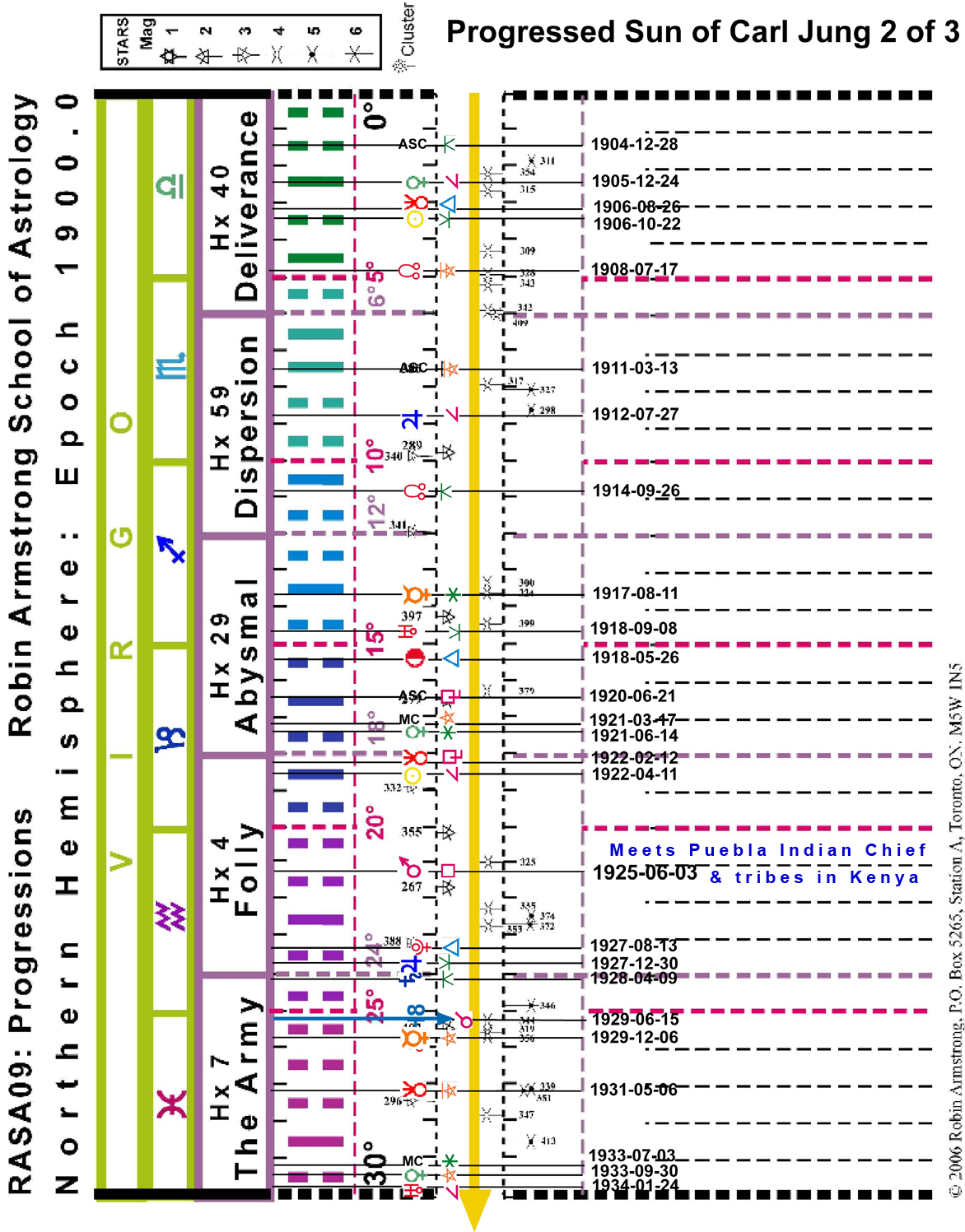 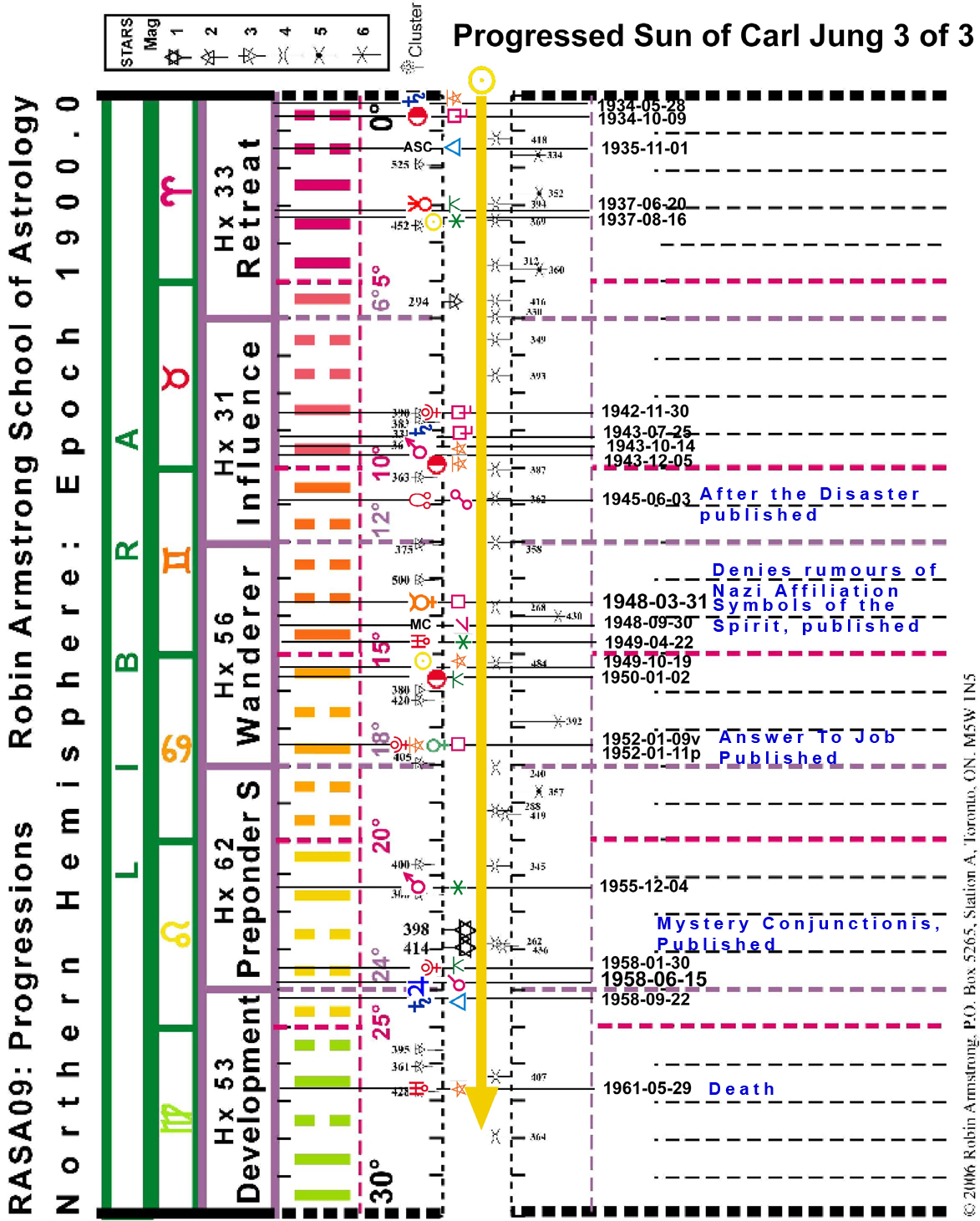 Allowing for a 1 degree orb, relevant events will occur within one year before and one year after the exact event.

In the summer of 1887 Jung was knocked unconscious by a fellow student. He realized this was a way to get out of school. He began to faint to avoid homework and school. Diagnosed with epilepsy he was sent home for six months. He overheard his father worrying that he might not be able to work or care for himself. At that moment Jung became serious, overcame his aversion and went back to school. In this way he overcame his own problem. This was the event that taught him what neurosis was.

By this aspect Jung no longer stayed at home, but went back to school.

This was the period that Jung was working on his PhD.

In 1902 Jung accomplished his PhD at the University of Zurich.

In this period he met the Puebla Indian Chief in New Mexico, and also visited some primitive tribes in Kenya.

“After the Disaster” was published.

“Symbols of the Spirit” was published

“Answer To Job” was published. It generates strong reactions and even hostility, but it also propelled a surge in sales.

“Mysterium Coniunctionis” was published. While this alchemical treatise dealt with the significance of the sun and the moon and their phases, it also seems quite synchronistic that his progressed sun would be in conjunction with two very bright first magnitude stars.

The progressed Sun of Carl Jung would conjunct three first magnitude stars in his lifetime. The first was with Regulus in 1901. The second and third were with Spica and Arcturus and they both happened in 1957. So while he had three such conjunctions, they occurred in two special periods of his life.

Regulus, known as the Heart of the Lion, is considered a star of nobility and victory. It is of the nature of Jupiter and Mars. It is considered to inspire courage and victory. It was while his progressed sun was in conjunction with Regulus that Jung worked on and completed his Ph.D. It was at this point that he became his own authority and went on to establish new realms of analysis and psychotherapy.

Spica, the main star in Virgo, was known as the Wheat Sheaf. While concerned about innocence and the sublimation of sexual energy into cultural, artistic and spiritual directions, Spica was known to bring eminence, renown and riches. According to Reinhold Ebertin in his book “Fixed Stars” Spica has the nature of Venus and Mars, and it brings honour and fame to scientists, writers and artists. In the period of his progressed sun in conjunction with Spica, Jung published his “Mysterium Coniunctionis”. This work presented the mysteries of alchemy and astrology, and certainly revealed a transformation of sexual energies into higher expressions.

Arcturus is a prominent star in the constellation of Bootes, the ploughman or bear driver, or hunter of the bear. It has the nature of Jupiter and Mars and could be considered as one who is driven by higher understanding. Certainly the power of higher understanding permeated the life and works of Carl Jung, especially in the book he published at this time, “Mysterium Coniunctionis”.

There is a synchronistic parallel here that while publishing his “Mysterium Coniunctionis”, which dealt with the implications of the conjunctions of the sun and the moon as expressed in alchemy, his soul or Progressed sun would also be involved in profound mysterious conjunctions with Spica and Arcturus.