Carl Jung was born July 26, 1875, 7:32 pm LMT, in Kesswil. The coordinates are: 9E19’, 47W36’. The data source is his daughter: Gret Baumann-Jung who apparently took it from the horoscope that her father used. Listed below (for Carl Jung’s Sun) are the fifteen different degree symbols we have studied to date. 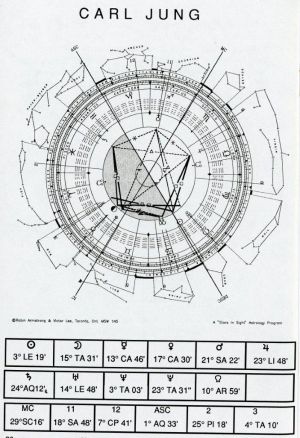 Carl Jung’s Sun is in the 04th Degree of LEO

LE 04° (Charubel) A carrier’s waggon; one of those with the tarpaulin overhead. Denotes an active person; one who is always on the move. In his case the saying is true: “The grass is not allowed to grow under his feet.” A practical person, always engaged in what is useful to himself or others. A business man, he will at a glance take in what may be to his own advantage or otherwise.

LE 04°(Sepharial) A cat upon the watch for prey. It denotes a person of the most prudent, circumspect, and patient mind; capable of sustaining great fatigue in the accomplishment of his desires; a mind gifted with much diplomacy, suavity, self- restraint, and watchfulness; keen in observing but slow to draw conclusions; capable when aroused, of much malice, but not of open anger. Firm in his attachments, a fast friend and unrelenting enemy. The native will succeed in life by dint of caution and perseverance. It is a degree of CIRCUMISPECTION.

LE 04°(Muir) Possessing a powerful will, strong love nature, sensitive. Silence is his best weapon as he is in danger of betrayal where he trusts most.

LE 04° (Jones) A man formally dressed and a deer with its horns folded. This is a symbol of self-assertion at a point of effective impact on the world, dramatized here on the side of an established and everyday reality. Formality becomes a magical ordering of the automatisms of lesser things, enlisting them in an enduring service to each individual’s more outstanding talents. His achievements become evident in the trophies by which he makes his consistent contribution of the real essence of himself to his fellows. The keyword is MORALE. When positive, the degree is exceptional capacity for winning and holding the esteem of men, and when negative, dependence on applause and a playing to the gallery to get it.

04° LE (Rudhyar): A FORMALLY DRESSED ELDERLY MAN STANDS NEAR TROPHIES HE BROUGHT BACK FROM A HUNTING EXPEDITION.

KEYNOTE: The masculine will to conquer his animal nature and to impress his peers with his skill in performing the ancient traditional power rituals.

This symbol may be interpreted at the strictly social level–the hunter’s trophies, his pride in showing them to members of his high-class club, etc. But if one refers to the higher spiritual mental implications of the sign Leo, one can see in this picture a reference to man’s capacity to overcome the animalistic tendencies of his bio-psychic nature according to certain traditional procedures. The implication of being “formally dressed” is that an important, if not the most important, goal the individual had in developing this capacity has been to “prove himself’–to others, as well as perhaps to himself.

This is the fourth stage of the twenty-fifth five-fold sequence. The symbol can be referred to eagerness to show oneself to the best of one’s advantage, which is characteristic of the Leo temperament: TO DRAMATIZE ONE’S ACHIEVEMENTS.

“On the polar pack a white bear lies in ambush by a cleft, waiting for a seal to emerge for air.”

All virtues born of prudence and reserve; and all attendant vices as well: suspiciousness, cunning and malice. The native may display great activity and practical sense and push his endurance to work to a superhuman level, but always with some selfish goal in sight. His gaze is sharp and unfailing, but he will not make up his mind before ripe reflection.

He will be constant in love, unflinching in hatred; he will make a staunch, devoted friend and a formidable foe, who will hardly fail to take revenge sooner or later for any offence, mighty as the offender may be. His wrath will not seek an immediate outlet. He will bide his time like a well laid trap ready to snap to. Only after detecting the vulnerable side of the one who harmed him or hurt his feelings, he will strike with ruthless deliberation.

His success seems to be bound to travels, especially overseas. He is likely to draw the greatest profit from his native cunning and practical sense for trade and diplomacy. The rest of the pattern will supply more precise details.

EXAMPLE: Giosue Carducci (Sun’s degree). N.B. Cf. 12th and 20th of this same sign, where the Poet’s Equidistance and Moon are; and especially Cancer’s 7th for his Asc.

LE 04°(Kozminsky). UNDER THE INFLUENCE OF THE SUN. An ambassador leaving the presence of a prince who is smiling significantly to his chancellor. Denotes one who may be deceived by smiles and promises. He should be especially careful of those in power, and should be wary lest in negotiations he betrays his plans and aspirations to keen and subtle adversaries. Wisdom is in silence. It is a symbol of Treachery.

04° LE(Leinbach): There is the beginning of real direction in this degree. The native has a form which shows a certain amount of stability. He is a very staunch reliable, loyal friend as well as a treacherous enemy who will seek out his opponent’s weakness and strike when least expected. This native is capable of success in the business world. He is influenced by his friends but he is not too easily diverted from the course he sets for himself. He knows what he knows and needs support and reassurance but is not likely to give up if that support is not immediately forthcoming. He will look elsewhere for the support he needs, and stick to his own path. There is considerable practicality here. The native is active and energetic in tracking down the things that interest him. He has an established will of his own, and although he needs confirmation from other people he generally finds it, and will be somewhat persistent until he does.

LE 04° (Leek): A loyal friend with high ideals and he expects friends to appreciate and live up to them.