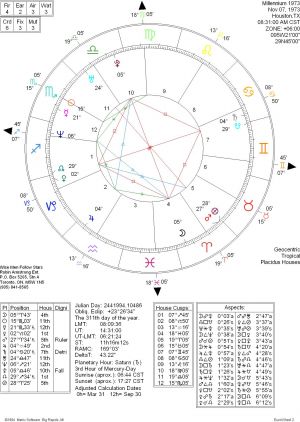 Using degree symbols to gain insight about oneself can be challenging at times, but on the whole it is a rewarding and insightful process. Using the degree symbols for astrological prediction can be precarious. Symbolic degrees enhance and can assist subjective understanding, but are not a valid replacement for sound astrological deduction. Without discriminating astrological expertise great vulnerabilities arise. Caution is needed around the unconditional use of degree symbols.

Tuning in to one’s psyche can be enlightening. That is a very different matter than getting an reliable time perspective on one’s life. Using the degree symbols should not replace transits or progressions. There are very well established astrological criteria for determining when a time is propitious or not. Prediction by degree interpretation alone is dangerous.

The following article is a press release used to promote a major spiritual happening in 1973. It gives an idea of how an astrologer using the Sabian Symbols justified the time that the event should be held.

The event was considered by devotees to be “Millennium 1973”! This event would usher in the beginning of an era of 1,000 years of peace. It was billed as “the most holy and significant event in human history”.

The spiritual teacher was Guru Maharaj Ji, known as the baby or boy guru because of his youth. He was considered by his followers to be the divine incarnation of God. The event was planned and the date chosen with the advice of astrologers.

Guru Maharaj Ji rented the Houston Astrodome for three full days to hold the event, November 8 to 10, 1973. He chartered planes from major cities around the world, anticipating an excess of 100,000 attendees.

Unfortunately the attendance was less than 20,000 (a generous estimate at best). The event was a colossal disaster. It was said that over 2.5 million dollars were lost. This was a huge amount of money. It would have cost less to elect a new pope or take over a television network for a week.

In the following press release you will see how astrologers used Rudhyar’s Sabian Symbols to convince themselves and their Guru that this was the best time and place for the event.

Unfortunately there are good and bad in all professions. A little knowledge and a lot of faith is not adequate qualification for professional astrological predictions!

On October 25, thousands of devotees of Guru Maharaj Ji will gather  at Plymouth Rock, Massachusetts, to deliver the call to Millennium.  “Coincidentally”, on that day comes the new moon, always a time of new  beginnings.  By November 7, when Guru Maharaj Ji flies into Houston to be greeted  by at least 50,000 people, the moon will have set up a grand cross in  the sky. This is a square formed by four planets, the most dynamic and  rare of the astrological configurations. In cardinal (action-type) signs,  it signifies an attempt to do the infinite, to accomplish the impossible.  This particular grand cross is close to an exact square, which intensifies  the effect and increases the energy.  One of the key planets in the cross is Pluto, the most intense and  deeply-affecting of the planets, dealing with rebirths and great  transformations and deeply-rooted changes.  An interesting comment on this position of Pluto is found in  Dane Rudhyar’s An Astrological Mandala. Rudhyar, prominent author and  lecturer, has been the key figure in modern humanistic astrology whose  work The Astrology of Personality is a widely read and highly respected  treatise on the psychological implications of astrology. He devotes an  entire book to the Sabian symbols, a highly evolved system of symbols  or images for each of the 360 degrees of the zodiac.  This fall, Pluto first spends a month in the degree (5° Libra)  which, according to Rudhyar, corresponds to “A man revealing to his  students the foundation of an inner knowledge upon which a new world could be built” – an uncannily accurate description of Guru Maharaj Ji’s  mission. From there, Pluto moves into the degree where “A man watches  his ideals taking a concrete form before his inner vision,” at the time  of the festival.  Conflicting with this vision of a “new world”, at another corner  of the grand cross, is Saturn (limitation, pragmatism, society). this  indicates the need to be sensitive to the direction and values of the  country, and to reaffirm what is good, rather than place oneself in  conflict, the downfall of many reformers. This Pluto-Saturn conflict,  a long-term aspect which will continue through Millennium, is also  responsible for the sense of insecurity plaguing this nation and others.  Stability, tradition, and respected institutions such as the Presidency  of the United States, are all suffering. The grand cross of November  7 will throw this insecurity into higher focus.  Most remarkable of all, at the moment the grand cross forms on  November 7, the sun moves into 15° Scorpio, one of the “four gateways  for the release of the power of the Avatar or divine incarnation,”  according to Rudhyar. This is an incredible coincidence.  The only available channels for the tremendous pent-up energy of  the cross will be Jupiter and Neptune, the two planets of religious  truth and spirituality, which are also in very close aspect, as exact  as the cross itself. And Neptune (spirituality, idealism, and Oneness)  at this same moment, will be rising in the East in Sagittarius (religion,  search for the truth), on the exact degree of the horizon. Neptune is  the ruler of the Age of Pisces, begun with Jesus Christ, now coming to completion, and its position in Sagittarius since 1970 has been  responsible for the resurgence of religious movements, Any planet  that is rising in a chart becomes very significant, and this third  event happening simultaneously strains credibility. It is roughly  equivalent in probability to three planes crashing together in the  sky.  When Millennium ’73 officially begins on November 8, a number of  key planets are in significant degrees,  Jupiter (5° Aquarius), the planet  of religion and the search for the truth, indicates that “A council of  ancestors is seen implementing the efforts of a young leader,” again  emphasizing the ability of the leader to draw on and bring to fruition  the traditions and ideals of the community.  And again like Pluto, it  follows the degree where, Rudhyar says, “A Hindu Yogi demonstrates his  healing powers,” indicating the use of inner knowledge to end suffering.  By contrast, the degrees before and after show “A deserter from the

Navy,” and “A masked figure performs ritualistic acts in a mystery  play,” which are comparatively insignificant.

Uranus (25° Libra), the ruler of the Age of Aquarius, is where  “the sight of an autumn leaf brings to a pilgrim the sudden revelation  of the mystery of life and death,” dealing with “the ability to discover  in every experience a transcendent or cosmic meaning. The mind…  pierces through appearances and perceives the great rhythms of universal  life.” This is the third reference to the birth of a new awareness.  And at the very end of the festival, Uranus moves on to the degree where  “An eagle and a white dove change swiftly into each other.”

The position of the sun (17° Scorpio), the light of all the planets,  emphasizes “a total reliance upon the dictates of the God-within…the  surrender of the ego to a transcendent Force which can create through the  person vivid manifestations of the Will of God,” says Rudhyar.  Neptune (7° Sagittarius) shows “Cupid knocking at the door of a  human heart; a stirring of individual longings for romantic love.”  With Neptune in this position, this would be spiritual, ideal love,  a unity with everything.  Perhaps the most outstanding point in the chart for November 8  is the position of the nodes of the moon. The south node is at the  first degree of Cancer (the sign of the soul), indicating a whole  new sense of the soul or Self, symbolized by “On a ship the sailors  lower an old flag and raise a new one: a radical change of allegiance  exteriorized in a symbolical act: a point of no return.”  The north node, at 1° Capricorn (the sign of the collective),  is symbolized thusly: “An Indian chief claims power from the  assembled tribe,” indicating once more that “the religious ideal…  has now materialized or crystallized into sheer power – the power to  lead the community and to ensure its welfare or even its physical  survival.” It involves a whole new sense of society and the collective  purpose  And finally, on November 9 and 10, the last two days of the  festival, comes the full moon, which brings to a climax whatever has  begun on the new moon. This means the movement begun on October 25  will grow for two weeks to a peak of energy on these days. And at  the peak of the full moon on the morning of the tenth, Mercury will  pass directly over the face of the sun – a union of mind (Mercury)  and heart (sun). This is the only time this will occur before 1986.  Throughout this event, starting on November 6, the gigantic  Kohoutek comet will be visible Its astrological effect is impossible  to predict, but it will be very powerful, particularly when it reaches a  size of 30° of the sky – an entire sign of the zodiac. Its influence  will be felt this fall and winter, particularly in the aftermath of the  Millennium festival.  So with these aspects, we see the possibility of a resolution of  the intense changes and upheavals brought about since the extremely  rare conjunction of Uranus and Pluto in June, 1966 – which occurred in  very close aspect to Maharaj Ji’s Sagittarian Sun and Saturn. Within  one month of that date, He had become Satguru at the age of eight.

The above article is geared for the layman, with simplified terminology and omission of certain details. Here are some additional comments.

1. Saturn, already beset with the heavy Pluto square, and having moved into its detriment, Cancer, will soon go retrograde, so it will be the weakest point of the cross.

3. One astrologer felt that the T-cross left in the Moon’s wake would be the really dynamic aspect, focussing on Aries, new beginnings, and on Pluto, the seed of rebirth. He also felt that Venus’ position in esoteric astrology, was significant. Venus will move to make the T-cross more exact during the festival.

4. Close aspects fall into three groups: The grand cross plus Jupiter and Neptune; the Mars-Uranus opposition (which the Moon hits after the November 8,1973 program); and the exact Sun-Mercury conjunction on the third day. Other aspects are less strong.

Summary:  It does not take long to recognize the disaster in this chart. It is not the correct time to hold a special, popular, financially successful event. There is no substitute for competent astrological advice. When degrees are used for prediction they should enhance and not replace sound astrological deduction.

It is one thing to find relevance in degree meanings, but it is another thing entirely to use personal relevance instead of responsible practice. The degrees were encouraging, but the grand cross and other factors were not! Proper perspective was missing. Even in such a cult like scenario, astrology could have been the voice of reason and helped both the Guru and his followers avoid such an embarrassment. Astrology could have found a better time and perhaps a more moderate plan.

Great action based on little knowledge will seldom escape disaster.

Editor’s note:   Incidentally the I Ching Hexagram for 15 to 18 degrees of  Scorpio is “Standstill, Stagnation.” 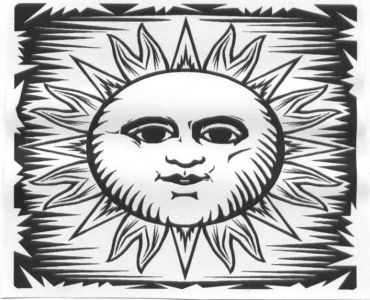