This is the fifth article in our series highlighting the life and works of Canadian Astrologers. We have chosen to highlight the life of Brigadier Roy C. Firebrace. We were able to find Roy’s birth data but unfortunately we could not find any photograph or image of him. 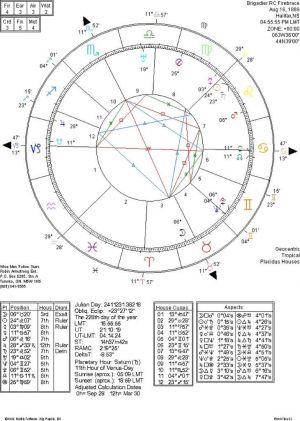 Brigadier Roy C. Firebrace was born on Aug. 16, 1889, at 4:45:55 PM, Local Mean Time, in Halifax, Nova Scotia. Nothing is known of Firebrace in Canada. He moved to England at some point, probably before the first World War. The Brigadier had an illustrious and colour ful career in the military. He served in His Majesty’s Service through both World Wars. During part of his service he was Military Attache in the Baltic States and Russia. He had personally interpreted Russian for Winston Churchill at cabinet meetings at Downing Street. He was known to have mastered seven languages. He was a soldier for forty years and an astrologer for thirty-five years. He was also extremely interested in psychic phenomena and occult studies.

Firebrace’s career as an astrologer was in England where he was instrumental in advancing the cause. He started as a tropical astrologer and later converted to a sidereal format, for which he has become most well known. Brigadier Firebrace was a prominent and influential astrologer. His life and works have in one way or another affected most practising astrologers today.

He first appears in the forties (in my records), active with the Astrological Lodge of London which was run by Charles E. O. Carter who was also editor of The Astrologers Quarterly. From articles in this journal it mentions that Brigadier Firebrace was Chairman of the Faculty School Committee. This I believe was a founding committee of the Faculty of Astrological Studies. The founding members of The Faculty of Astrological Studies were all very prominent astrologers: Charles Carter, Margaret Hone, John Addey, Ronald Davidson, and others. Firebrace was Vice President of the Faculty until 1953 when he resigned. He was elected as Vice President again in 1954 with John Addey, and Joan Rodgers. (There were three vice-presidents.) During his period with the Lodge he often chaired the meetings. He remained Vice President of the Faculty until 1956. During this period he lectured and wrote several significant articles among which were “Tertiary Directions”, and “The Atomic Age”.

Firebrace left his presidency of the Astrological Association in 1961 to found and edit another astrological quarterly journal called “SPICA”. By this time Roy was dedicated entirely to Sidereal Astrology and so was Spica. He had the support and contributions of some of the western world’s finest sidereal astrologers, such as: Cyril Fagan, Rupert Gleadow, and Garth Allen. It was Spica that made Brigadier Firebrace famous in America. It was a technological journal with a personal touch. Roy researched and published statistical studies and calculations. He filled his journals with sidereal horoscopes and details. He inspired many people to take up the Sidereal cause and also encouraged others to do plenty of research before drawing a conclusion.

Brigadier Roy C. Firebrace was a pioneer and champion of astrology, but few people realize that he was born in Canada. Roy died at 10:30 am on November 10, 1974 in London, England.