WEATHER: At 7:00 PM in Toronto, things were so over cast and cloudy that we almost called it off. The winds were strong though, and there was the possibility of it blowing over. The weatherman said varying 50%—90% over cast and that there might be some clear area at times. I phoned Dominique at King City. She said it was cloudy with spots of clear areas and strong winds. She thought it might blow over. We decided to take a chance and go. We brought the slides of planets as viewed from a 200” telescope to look at during cloudy periods.

8:15 PM: We arrived to a patchy sky. It took only 10-15 minutes to set up this time. It was very cloudy, moist, and cool. The Pole Star was obscurred so we simply approximated alignment and looked at Jupiter. It was only clear for moments at a time but the telescope penetrated through most or much of the clouds. We could see bands across the planet and the 4 moons, plus what seemed to be 2 more moons. The 4 moons were aligned in a straight line.

Visibility was somewhat hampered by the close proximity of the waxing moon to Jupiter (Jupiter 5º south of the Moon). We changed lens to the largest (4mm—500x) and looked again. Although much closer the visibility seemed less. We could really see the cloudiness of Jupiter.

8:45 PM: We turned the telescope to Mars. Mars seemed so small that very little detail could be observed other than a dark spot in the centre of the reddish globe. With the larger lens, we could see a larger Mars but with less definition.

9:00 PM: The clouds came in and covered the sky. We went in for warmth. After about 30 minutes we came out. It was clear. We set up correctly to the North Pole this time and set the telescope correctly to Right Ascension and Declination. Clouds came in again so we went in for some soup. We watched slides of the planets taken from the Palomar 200” telescope. We calculated the position of Ceres and after about an hour we went out again. This time to perfectly clear skies.

11:30 PM: We viewed Saturn and saw it very clearly: the rings, the space between the planet and the rings, 3 moons and possibly 2 others. Saturn had an aura of white light around it. We looked also with the largest lens but it kept moving rapidly out of the much smaller focus field. Constant adjustments became impractical and we put the smaller lens back on.

We conducted a search for Ceres. We set the telescope at the correct R.A. and Declination and looked. A 5 or 10 minute scan was made in the vicinity. There were many stars and not knowing how to distinguish the asteroid Ceres from the rest, we gave up the attempt to find it.

12:30 PM: We turned to the Great Nebula in the Sword of Orion (M42) It was a silver-white hue and quite distinct. There was a fascinating group of four bright stars, very close together within the expanse of the Great Nebula. They seemed to form a cross – a heavenly cross radiating a magnificent aura of white light. A subtle feeling of wonderment and reverence accompanied the viewing. It was very impressive.

ALCYONE, in the Pleaides – a bright white star, the brightest of the Seven Sisters.

SIRIUS, said by Alice Bailey to be one of the main centres from which spiritual light radiates to Earth. One of the most significant stars in the heavens. Our observations certainly convinced us (The three of us that were still up and out). I think that none of us will ever forget Sirius. Sirius is a brilliantly radiating star. It is exceptionally bright. Its sharp whiteness is accompanied by several other colours, red and blue. We could certainly feel the aliveness of this star. It is magnificent.

CASTOR – a large white star in the Twins (Gemini)

POLLUX – a large star with a yellowish-orange tint. It is also in the Twins.

A very bright Meteorite flashed by.

MIZAR – the double star in the Big Dipper. Its companion is also a double star.

CAPELLA – was overhead when we viewed it. It is a bright white with a yellow tint.

POLARIS – considered a second of the main centres where spiritual light radiates to Earth.

MOON: lastly we focussed on the Moon with the largest lens (4mm=500x). We could only see one crater and a small area in front of it (which actually contained 2 small craters). The surface was grey, very grey and shady. In the foreground was a mountain range and some distance away was the crater. I think that it was Crater Petavius.

It was getting very damp and some moisture collected on the lens, so we called It a night. We took the telescope inside and let it dry slowly. It took about 45 minutes to dry and in a last minute rush to put the telescope away, using pliers instead of the Allen Keys that we didn’t get to go with the telescope, my hand slipped and my Jupiter finger was in between them. Another 15 minutes of first aid and the night was over. It was well after 3:00 A.M. by this time.

It was by far our best outing yet.

On the following three pages are the hand drawings of some of our observations. It is one of our disciplines to sketch or draw what we view, as accurately as we can remember and as we are capable of. The observations were drawn out by Patti Johnstone and myself (Robin Armstrong). This article is simple the record of our third outing with the newly acquired Celestron 8 telescope. As far as we know this is the first Astrological Observatory active in North America. Now a telescope can be focused at phenomena of astrological concern, which astronomical observatories tend to overlook. By Sept. 1976 we plan to initiate public outings. 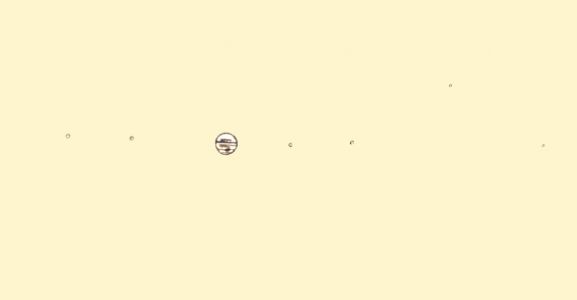 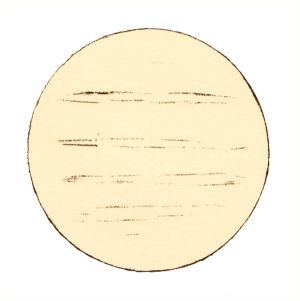 With the largest lens, Jupiter was much larger but the visibility was less. 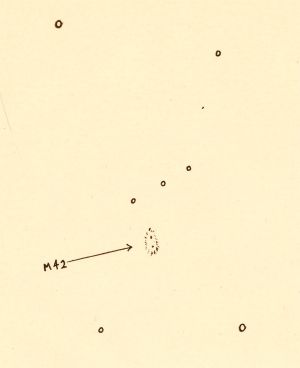 The Great Nebula in the Sword of Orion: a mystic cross within an aura of light. 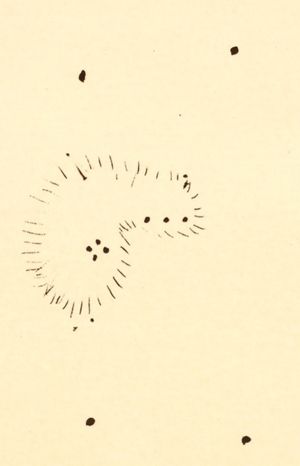 Saturn was surrounded by its own aura of light.

Here we saw 3 and perhaps 5 moons of Saturn. 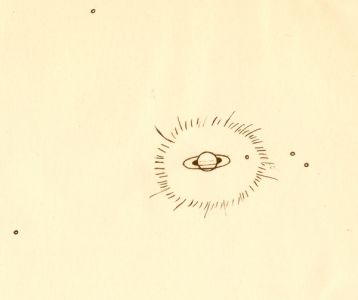 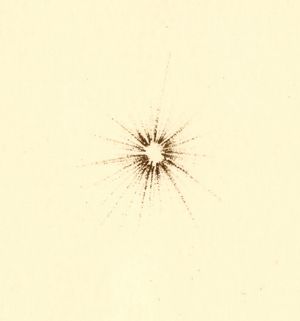