This Spring, three more degree systems were introduced to our group. They are by E.C. Matthews, Donna Walter Henson, and Chandra Dhi Manthri. This brings our total of degree systems assessed to date up to 20. There are still more than 6 systems on hand that we have not yet gotten to.

The first of these we studied was “Fixed Stars and Degrees of the Zodiac Analyzed” by E.C. Matthews. It was written in 1947 and reprinted in 1968 by the Motivational Development Centre in Albuquerque, New Mexico. He gives a keyword and adds comments and further ideas. He has included the position of the major stars in the degrees and has given an interpretation for them. Since the stars precess through the zodiac he claims many earlier degree systems are no longer totally correct as the stars are now in different degrees.

Matthews refers to the works of Alan Leo, Dr. Henry Gordon, Chandra Dhi Manthri, Isidore Kozminsky, Maurice Wemyss, Charubel, and “La Volasfera”/Sepharial. He uses the book “Notable Nativities” for his source of birth data. His degree meanings have extensive associations to famous people and which planet they have in each degree. He does integrate as much astrological association within the degree references as he can. He does not lean towards spiritual interpretations, but seems to base his conclusions on stars, behavioural implications and research.

On the whole Matthews’ degree meanings were found to be refreshing and were easy to identify with. His references to the horscopes of famous people was stimulating. He used symbols rather than words wherever possible and he also included aspects to a degree.

The second system we looked at was the “Degrees of Life” by Chandra Dhi Manthri which was published monthly in Wynn’s Astrology Magazine throughout 1938. Manthri claims to be a student of deep insight and has much astrological experience in ancient Egyptian and Hindu schools. These degree meanings were hand copied around 1903 from an old book, which was in the possesion of its illuminated owner, in Asia Minor. He says the creative words are the keys to the house influences of each degree.

Manthri’s “The Degrees of Life” was reprinted in 1974 by Astro-Analytics Publications, Van Nuys, West Covina, California. In the introduction to this edition it suggests that this was copied from an old sanskrit text, but may have originated from a much earlier Indus Valley Text, which preceeed Sanskrit by a millenia!

Manthri’s degrees represent a refreshing new approach. It is written in old English using words like Thine and Thou. First there is a creative word which seems to be in an eastern language, probably Sanskrit. Then comes a discourse in which the degree seems to be speaking or preaching to you. Perhaps it would be better thought of as if the Masters themselves were speaking to you through the degrees. Each degree contains a different lesson. He does have double meanings for some degrees as he follows a pattern of duads (2°30’ per segment). It is much more direct and interactive than other degree systems. Each systems teaches a lesson rather than simply giving a symbol to reflect on.

The style and content of these degree lessons command attention. You definitely have to check yourself out against this standard. If it were not for the old English this system might have become one of the most used today. They hold to a spiritual truth or path. They incourage the reader to develop along this path and to avoid the pitfalls that take one from one’s path.

In her system Donna gives careers for each degree rather than keywords. She adds some comments in places, but on the whole the remainder of her interpretations is a word for word copy of E.C. Matthews. She seems to have compiled her meanings from the books mentioned above. This does not invalidate her work. She has researched the material at her disposal and presented it. She did take a significant lead in her classification system from C.E.O. Carter. She includes an extensive alphabetical index to her degree interpretations. She lists diseases, jobs, and other concerns by name and reference to the degrees of the Zodiac where it was mentioned. This procedure deserves applause and others would be wise to adopt it. 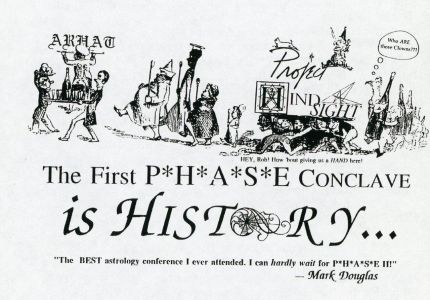