Since December, we have only introduced one new degree system: the Sabian Symbols.

We started with the Marc Edmund Jones version and have worked with it exclusively for the last three months. The degree material in this volume is based on Jones’ book. Our December meeting introduced the Sabian Symbols and set members afire on their own charts. The January meeting was spent analysing the degrees in recently elected Canadian Prime Minister Jean Chretien’s horoscope. February we went back to a personal discussion of the Sabian degrees.

We will be using Dane Rudhyar’s version of the Sabian Symbols for the next issue. His symbols are interpreted with a humanistic slant. Everything is positive, there are no negatives. We also discovered another set of Sabian interpretations by Rick Klimczak in Maryland who is part of the Silver Spring Sabian Symbol Society. Rick has adjusted the symbols and interpretations to make them simpler to identify with. We also received material from Lynda Hill, an Australian Astrologer who works with Rudhyar’s Sabian interpretations. We will here more from these astrologers in future issues.

On the whole most of us really liked the Jones interpretations. We were able to gain deep insights and revelations. His explanations seemed to ramble on excessively, and appeared to obscure one’s getting at the meaning. He uses the English language in a brilliant and more literal manner than we are used to. Our modern speed of information access makes his means of expression seem ludicrous or exasperating at times. It does take quite an effort to follow some of his multi-phrased run-on sentences.

However on slowing down and taking the time to follow one idea at a time, Jones becomes brilliantly insightful and quite a delight. He certainly gives significant meaning to the word literacy. Not everyone could get into him fully, but fortunately there are several levels of meaning for each degree and there was usually one area that could be related to.

One of the more unique factors in Jones’ interpretations, is that he gave an indication of both a positive and a negative manifestation of each degree’s meaning. Some of these associations are a little naive, but this is the first time we have found a dual focus on each degree. It does allow for some counterbalance. Each person has a choice and is challenged to make the most of his or her degrees. This allows us to integrate the degree challenges within a horoscope interpretation and to observe which side is happening, without feeling overwhelmingly fated or depressed.

One criticism that has arisen over the Sabian Symbols is that many of them are both dated and essentially prejudicial. They include a sort of colonial and spiritual hierarchy in which the white, English speaking, Christian races are more evolved than the others, and men of course seem to be more spiritual than women. This of course is partly influenced by the morals and values of time 1925 and place when the symbols originated. A short article on this subject is included later.

Some people were won over completely by their symbols and most everyone could associate with Jones interpretations. Over the next few months we will work on the Rudhyar and Klimczak versions, as well as Carelli’s, and Kozminsky’s degree systems. 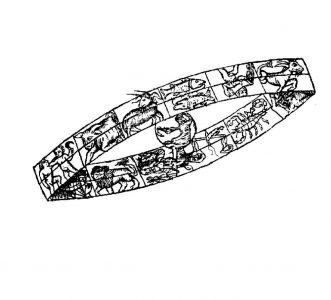