This is the third article  in our series highlighting the life and works of Canadian Astrologers. We hope through our monthly meetings to evolve these articles into a book on the History of Astrology in Canada. We are collecting astrologers’ names, groups, stories, conference programs, and even the names of prominent Canadians known to use astrology. 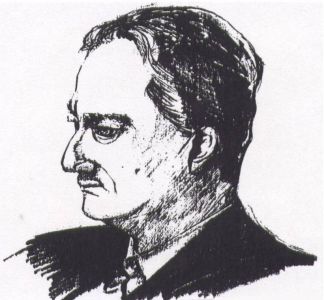 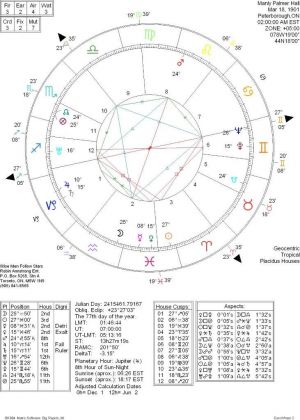 Manly Palmer Hall was one of Canada’s more well know astrologers. He is perhaps more famous as a mystic, a philosopher, and a student of all paths to inner understanding. Manly Palmer Hall was born in Peterborough, Ontario, Canada on March 18, 1901, at 2:00 AM (EST). He lived in Canada a mere five years after which he was brought up by his grandmother (a Libra) in New England. He mentioned his Grandmother dearly but never spoke of his mother or father. He and his Grandmother apparently changed residence about every 2 years. Throughout his life, Manly was also an avid philatelist, and specialized in the collection of spiritual stamps. Manly has delivered more than 7,000 lectures around the world.

Manly was a prolific writer and mystical specialist. He encouraged most spiritual paths but was not a promoter of any one specific religion or belief. His material has stood as the voice of authority on secret teachings (or at least a voice of inner wisdom), for over 65 years. He was such an impressive writer on religions, mystical societies, like the Rosicrucians, on Kabballah, and on other mystical arts; that his extensive work with astrology is not as vividly remembered. It was none-the-less pioneering and excellent work.

Manly Palmer Hall maintained a very high astrological profile in “Wynn’s Astrology Magazine” throughout the 1930’s and 1940’s. He wrote countless articles and wrote a regular column entitled “Answers” which ran for years. The main drift of his work was on explaining the spiritual implications of astrological phenomena. He did write numerous political and technical articles as well.

The following is a list of some titles of his magazine writings:

How To Read Past And Future Lives;

Appearance of the Zodiacal Types;

Astrology as a Religion;

Mohammed and the Astrology of the Arabians;

Imperial Rome and Its Astrologers;

Plato and Astrology in Greece;

My Horoscope of Abraham Lincoln;

Speculations as to the Horoscope of Socrates;

Fate and the Fixed Stars;

Rasputin – Nemesis of the Romanoffs; etc….

He is the author of more than 35 hard cover books, and 85 paper-bound books. He has also made many excellent audio cassettes.

“The Story of Astrology” (one of the few histories that include Chinese, Tibetan, Burmese, Hindu as well as western cultures);

His other books include material on Astrology, Kabballah, and mysticism. His most awesome treatise is “The Secret Teachings of All Ages”

In 1934 Manly Palmer Hall founded “The Philosophical Research Society, Inc.”, a nonprofit organisation of which he remained President throughout his life. His PRS Journal has been published quarterly non-stop since 1941. The magazine covers philosophy and comparative religions, but also includes much astrology. The Philosophical Research Society houses an extensive and very special library. This library includes a large section on astrology. In this library is much of the material and many of the manuscripts which Manly referenced in compiling his works. This library is open to the public in the Los Angeles area.