Stars are energy sources (points of light) dispersed uniquely throughout the universe around us.

All life within the Solar System is dependent on the Sun for life, light and energy. The Sun is the Sol (Soul) of the system. The planets orbit around the central Sol, reflecting light and changing the electro magnetic force fields within the Solar System. The planets act as distributors of the Solar Life Force. It is by virtue of their interrelated positions that Life on Earth or on other planets becomes a reality. The life potentials, the character of the individual, the nature of the life experiences, and the rhythm of growth and development can be comprehended by a study of the Solar System at the time of and place of birth (the horoscope).

The Sun, the planets, and the Moon studied in Astrology are all members of one family — ie. the Solar System. Our Sun is the central figure or Mother Star of our Solar System. However, our Sun is simply one star in a Galaxy of billions of stars, and it is a very small star at that when compared to it brothers and sister stars in the Galaxy.

It is true that we are conditioned by the planetary pattern of the Solar System at the moment of birth (the horoscope) and also that the Sun is the main figure in this influence; however we must not forget that our Sun (Mother Star) is simply a tiny member of a much greater family (the Galaxy) and it takes on its sole (Sol – Soul) uniqueness at any moment from its relation to all other stars in the Galaxy and to the galactic centre of our Mother Galaxy.

It is quite possible that other stars in the Galaxy also have planets orbitting them, perhaps in much greater numbers. To me that the Universe is filled with life, is an obvious truth.

Our Mother Galaxy too is part of yet another still larger family of Galaxies which spiral around the Super Galactic Centre.

It is naive to think that other stars and Galactic Giants (Galaxies) do not have an effect on our Sun and on Life on Earth. They do in fact have a great effect. But how? I ask you how can these effects be measured? How can they be made significant to us as individuals experiencing life with its multiple crises and upheavals?

It is here that Astrology and in particular the Zodiac becomes an exceptionally useful tool. Basically, the stars position themselves around the circle of the Heavens and throughout the degrees of the Zodiac. Much of the Astrology handed down to us through the Ages of Man has attempted to convey what “those who have gone before” have learned of these effects. Their messages from the stars make up the backbone of spiritual teachings of all times and ages on Earth. Through the horoscope we come into relation with the degrees of the Zodiac and thus with the stars in the Heavens.

When we try to explain life exclusively by the Tropical Zodiac, planets, aspects, and houses, we inevitably restrict or limit our understanding. Without considering the effects of stars and Galaxies on individual destinies, we will not have a sufficiently large and varied (ie. inclusive) frame of reference to enable us to comprehend the true nature of Life’s challenges and experiences. Without the use of stars, Astrologers will continually find blind spots and errors of judgment in their interpretations.

Stars are responsible for approximately one tenth of the light that reaches Earth. Light is energy and stars most definitely have their potencies.

The stars represent a higher frequency of Life energy than Sun light. They are always functioning but we humans are not always sensitive or evolved enough to be aware of stellar energies. It is hard enough for some of us to tune in to our own Soul (Sol)…. a seemingly obvious factor; How much more so then to the stars? For example: the effects (or transits) of the three outer planets, Uranus, Neptune and Pluto will rarely have a positive effect if one has not dealt with the lessons and responsibilities of Saturn. If Saturn is ignored the outer planets will have disruptive effects. Likewise if the Soul (Sol) is not developed in a life, the effects of stars are liable to be adverse and disruptive in no uncertain terms. Likewise if one has not developed ones own galactic nature the effects of a direct relation to another Galaxy is liable to be devastating, or else seemingly non-existent.

If one is consciously on the spiritual path, and has built the true foundation, then these heavenly lights operate as angels or as divine apparitions which light up the Way.

Some people may only have Mercury conjunct a first magnitude star and they will have first magnitude minds. etc The possible combinations are alive with significance when applied to an individual horoscope.

Before one starts working with stars in a horoscope, a firm grounding in the basics of astrology is necessary.

The stars are tedious to work with unless you have them printed on the chart form before you. This is also awkward as the stars are unequally distributed around the Zodiac. Some degrees contain several stars. Many problems are posed by listing the stars, their names, rulers and magnitudes in a chart form. Astrologers have so far only succeeded in making a chart look cluttered and difficult to work with.

In this article I wish to present a new method of stellar classification and labelling. This new method of listing stars allows for an immediate recognition of relevant stars in a specific horoscope, and for an instant reference as to the magnitude and nature of that star. For technical purposes the names of stars are not necessary, if one knows nature, magnitude, and Zodiacal position of it.

A planet or angle conjunct a star will be magnified proportionately, and stimulated (or activated) according to the nature of the star.

Primarily work with the conjunctions.

Lastly work with the squares.

Oppositions have half the effect.

I would tend to tighten the orbs considerably for oppositions and squares , possibly accepting only 15’ to 30’ of a degree as a valid orb. The real test is in your own observations, through which you should come to your own conclusion as to allowable orbs. 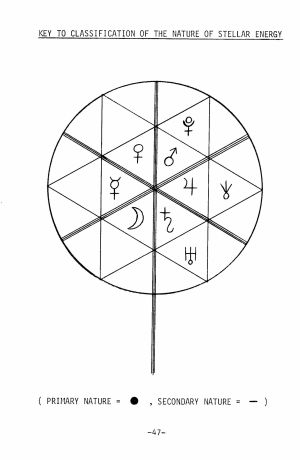 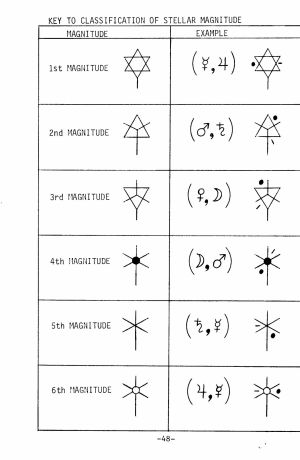 There is one exception to the preceding classification key:

On the stellar chart I have also placed some higher frequency astronomical phenomena: such as Galaxies, Quasars, Pulsars, Supernovas and Black Holes. Very little, to date, has been done astrologically with this information. They are included here to incite you to stretch and develop your astrological perception to and beyond its limit. I find that these factors can in some cases be of prime importance. 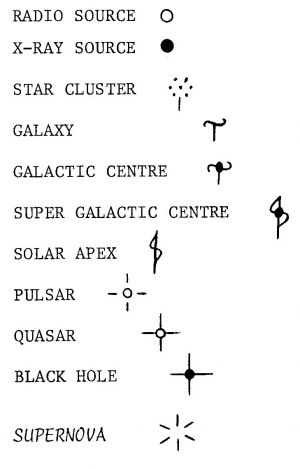 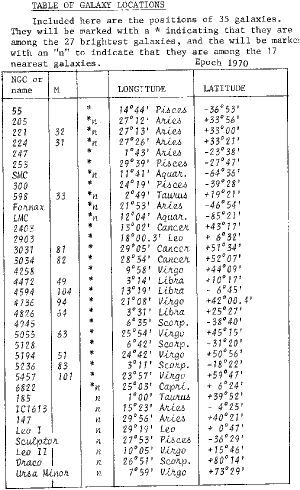 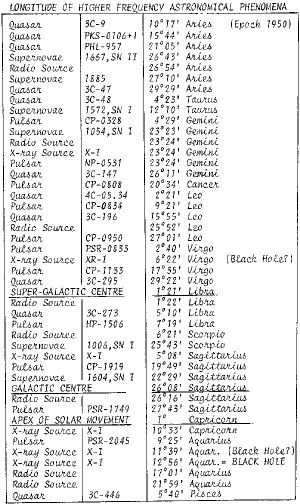