Canada ‘a birth date, although seemingly obvious, has been greatly disputed by Canadian astrologers. In my work with other astrologers, I have encountered at least five different birth charts for Canada. Many insisted that their time was correct , but no one was absolutely certain. This article will present the actual historical facts and astrologically put them to the test of an election prediction. Robert Armitage, Ottawa ‘s Representative of the Canadian Independent Astrologers Order, agreed to visit the National Archives to find the real story of Canada’s birth. After spending much time reading microfilm newspapers and computer printouts of the MacDonald Papers, he found a book entitled “Brown and the Globe” Vol.II, by J.M.S. Careless, Toronto. Apparently Robert went through 16 rolls of microfilm newspapers. “Brown and the Globe” put the story together and removed most of the confusion. Here are the facts:

On Friday, the act of Imperial Parliament uniting the Provinces of Canada, Nova Scotia, & New Brunswick received Her Majesty’s assent and nothing now remains to complete finally the erection of the new Dominion but the proclamation of the Governor General declaring the Act in operation.”

2). “It was proclaimed on May 22, to take effect July 1 after which the elections would ensue. The summer then would bring the actual test.”

3). “Just three days later came Dominion Day, born, in Toronto, to the Midnight peal of church bells, as bonfires were set blazing in the downtown streets.” ………. Brown and the Globe, p. 251.

Because of the undefined nature of Labrador, I chose the Eastern tip of Nova Scotia – Cape Breton, (approx. 60W, 46N) as the first part of Canada to experience 00:00 AM., July 1, 1867. There was no Daylight Saving Time. In fact there was no Standard Time Zones either. The Local Mean Time (Sun time) was used by all. This means that the chart drawn for 00:00 AM., July 1, 1867 will be almost exactly the same, whether we take the place as Cape Breton, Nova Scotia; as Ottawa; or as Toronto, Ontario. The ascendant will change a couple of degrees at the most. The Midheaven will remain the same, and the Moon won’t move more than 1 degree. So we can be certain that Canada has Aries Ascending conjunct Neptune, a Capricorn Midheaven, and a late Gemini Moon. The events leading up to and surrounding the July 8, 1975 National Election verify this natal chart quite conclusively.

At this point, I have to mention a coincidence which, if nothing else, should provide Canadian astrologers with a thought provoking symbol. On looking at the July 1, 1867 Nativity (birth chart) we see the Sun conjunct Uranus (astrology) in the 4th House of the home. And the first line of our national anthem is “Oh Canada! Our home and native land”. Canadian astrologers should wake up and adjust themselves to the role that astrology will play in Canada ‘a destiny. We live here. We work here. It is important that we answer the needs of the country. It is obvious that we should study Canada ‘a nativity to determine what those needs actually are. Astrology can provide realistic guidance whether applied to individuals, businesses, or nations. Elections offer to the astrologer an opportunity to sharpen and test both accuracy of perception and ability. Will you embrace the challenge? Will you put your understanding to the tests Do you believe astrology or do you know it? Do you trust your judgement? 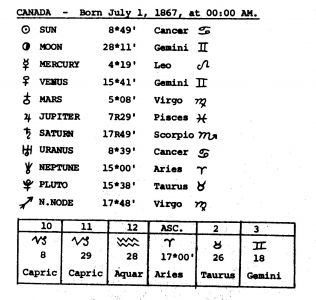 To determine the outcome of the election, the time in Ottawa, of the last vote in British Columbia was taken. The poling stations in British Columbia closed at 7:00 P.M., Pacific Daylight Savings Time. In Ottawa it was 10:00 P.M. Eastern Daylight Savings Time, or 9:00 P.M. Eastern Standard Time. The chart drawn up for this moment will signify the election results. It will therefore be the birth chart of the new federal government. The chart is drawn up for Ottawa because Ottawa is the capital of Canada.

Pierre Elliot Trudeau was born in 1919, on October 18, in Montreal, Quebec, Canada. 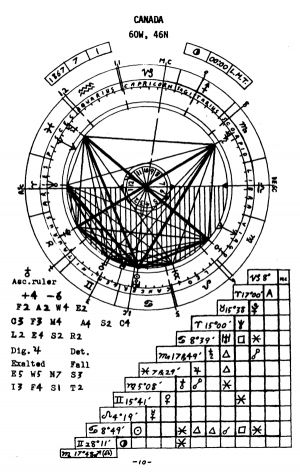 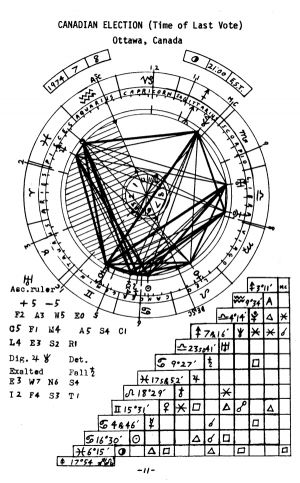 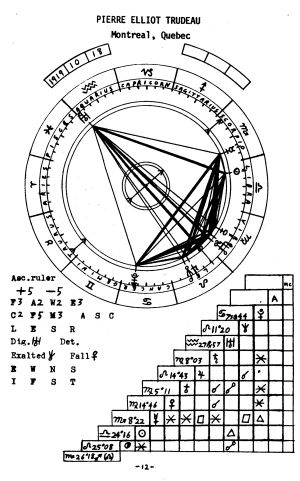 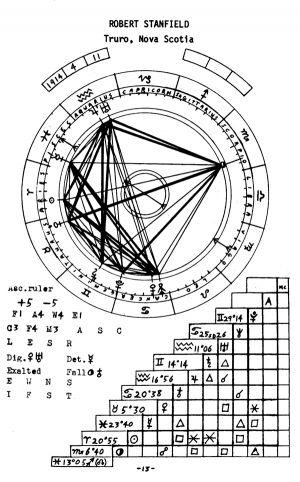 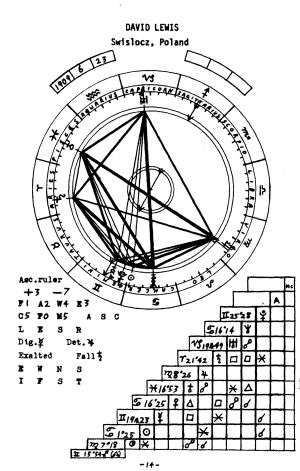 A Minority Liberal government was running the country. It had survived 15 years in office. Just as in many other countries, inflation was the major problem. Not one of the three parties had financially recovered from the previous election, and with the people so concerned about rising prices no one felt secure enough to initiate the expense of a new election. The winter oil crisis had the people quite upset. Much concern developed around Canada’s natural resources (especially oil and food). Canada’s economy was in danger and the home-loving citizens of Canada began to feel it where it hurts — in the pocket.

Mars moved into a wide conjunction to Saturn in Gemini (an air sign) in early April, 1974. The country was plunged into a nation wide air strike. After two weeks the country began to feel the squeeze. Inflation was bad enough. Now there is an air strike. What could possibly be worse?

The budget was in the process of being prepared for authorization by the House of Commons. If the budget is not approved by vote, the government will fall necessitating an election. Concern was increasing almost as fast as prices.

On April 18 Saturn entered Cancer. On April 20 Mars entered Cancer moving into an exact conjunction to Saturn. Canada was immediately thrown into a crippling nation-wide postal strike. Seven days later the Moon joined Mars and Saturn in Cancer. Confidence in the government was at a minimum. The budget was under attack. Eleven days later Mars moved from a conjunction of Canada’s Nadir into the exact conjunction with the natal Sun-Uranus conjunction. May 8, 1974 , the budget was brought before the House of Commons and defeated. On May 9, the government officially stepped down. Sixty days later, on July 8, 1974, there would be a national election.

The essence of the defeated Liberal budget was an adjusted tax burden to help counter inflation. The poor were to pay less taxes. The old age benefits were to be increased. The burden of inflation was to be shifted to large corporations in the form of higher taxes. Land speculators would have to pay extremely high taxes.

Canada’s natal chart has an exact parallel conjunction of the Sun to Uranus in the 9th degree of Cancer which is also conjunct the Nadir (Cancer 7+). Canadian’s need their homes. Canada’s Ascendant is conjunct Neptune in Aries. The natal Moon is in the 29th degree of Gemini in the Third House.

Both the air strike and the postal strike occurred with the conjunction of transiting Mars and Saturn, in the Third House within conjunction orb of the Canadian natal Moon. The Third House signifies communications, letters, and journeys, especially those that do not involve too much time.

Transiting Mars conjunct transiting Saturn was exact on April 20 in the 1st degree of Cancer. It was a little wide from the conjunction aspect to Canada’s natal Sun-Uranus-Nadir conjunction, but it was still uncomfortably close to the angle. When the Moon moved into Cancer on April 26, it pulled the conjunction into much greater effect. The government however, did not fall until 11 days later when transiting Mars began to leave the exact conjunction with Canada’s natal Sun-Uranus conjunction (Mars rules the Ascendant). On May 8, 1974 the government fell. July 8, 1974 would be election day.

The general opinion of the political experts for this election was that the Liberals (like their budget) would be defeated and that the Conservatives under Stanfield would get a majority or at least a minority win. The press supported the Conservatives and a general smear campaign was launched against Prime Minister Trudeau.

At the end of June, two weeks before the election transiting Saturn came into exact conjunction with Canada ‘a Nadir. On election day transiting Saturn was exactly conjunct Canada’s natal Sun-Uranus in the 9th degree of Cancer. Can you think of a better time for an election? A new focus was needed.

Saturn transiting in Cancer creates a generally conservative attitude and furthermore being in the Fourth House; Canadians are concerned about their homes. Canadians need to express their individuality through their homes. Rising prices of fuel and food have struck most effectively.

The solar charts (without houses) of the three party leaders were used for comparison. Robert Stanfield the Conservative leader, with his Sun at 21 degrees Aries began to campaign by immediately attacking Trudeau and the inadequacies of his policies. Stanfield said that if he were elected he would initiate (Mars) immediately a 90-day wage and price freeze in order to fight inflation more effectively.

David Lewis, N.D.P. leader, with his Sun at 2 degrees of Cancer, began his campaign with criticism of both party leaders for their lack of ability to help the people where help was needed; that is in the cost of living. He attacked the corporate rip-off of tax income. He implied that neither Trudeau nor Stanfield were suggesting sufficient measures.

Pierre Trudeau, the Liberal leader, with his Sun in 24 degrees of Libra, used the defeated budget as a party platform. He stressed the ability of the government to function and deal with crisis in a practical effective manner. He based his campaign on a realistic approach to governing based on clear thinking and strong leadership. He also criticized Stanfield and Lewis for causing a costly premature election.

The difficulty of this prediction was that only the solar charts of the three party leaders were available. The election transits could not be compared to their birth angles; neither could the progressed moon be used exactly.

David Lewis is experiencing a completed Grand Cross in Mutable signs by the overlap of the transiting (New government’s) Venus-Neptune-Jupiter T-Square applying to his natal Mars-Moon/Jupiter-Mercury/Node T-Square. He is also experiencing a Cardinal Grand Cross completed by transiting Sun-Uranus. Pluto’s transit is square his natal Sun. Transiting Uranus is opposing Lewis’ natal Saturn and squaring his natal Uranus.

Neptune was on the Midheaven of the Election chart. “Something was not as it seems” for the duration of the election campaigning. (The Tenth House is also the Prime Minister.) There were a large number of undecided votes right up to the last day. The day before the election, July 7, Jupiter went retrograde. By the time the people would reach the polls they would not be so enthusiastic and radical about getting rid of Trudeau and the Liberals. In fact they would probably not want to gamble at all on a new government with an unstable platform. The people will not be fooled. They know inflation is not going to be solved by wage controls and they are concerned about their own wages.

Neptune on the Midheaven of the Election chart — “Something is not as it seems”. The Conservative Party is the radical element — The Liberal Party is the conservative element.

The astrological conclusion is a Liberal Majority government.

The election results were as follows: Liberals 140, Conservatives 95, and N.D.P. 16. A majority government needs 133 seats.

David Lewis was unexpectedly beaten in his own riding by a woman Liberal. The N.D.P. Party was decimated and left without a leader.

Pierre Trudeau returns for his third term as Prime Minister of Canada with a majority government to support him. The Liberal Party under Trudeau will govern the country until 1978 and the defeated budget will be implemented. (The Mars-Saturn conjunction which brought down the government by energizing Lewis’ natal Sun, backfired to lay the cause of the costly election at his own feet. His platform was conveniently self destroyed and he lost in his own riding. “Be careful (Saturn) when riding (Mars) on a Saturn-Mars conjunction”).