Murder in the First Degree

This is a special series designed to look at the degree symbols in the horoscopes of violent criminals and victims. Many of the older degree symbols such as Charubel’s contain some rather harsh meanings. This section should allow for some of the darker and more insidious interpretations to be explored. It will also challenge the validity of some of the more harmonious degree systems. We are not certain where this will all lead to, but we do know that we will get there by degrees. 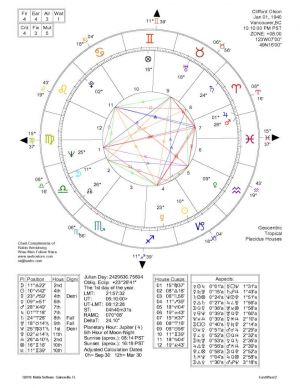 Olson pleaded guilty to eleven murders on January 14, 1982. In the midst of great anxiety of the children’s parents and having little or no clues as to the whereabouts of the bodies, police accepted a plea bargain deal with Olson which outraged the country. He agreed to tell them where the bodies were in exchange for a $90,000. trust fund for his own wife and child. While in prison Olson aroused further ire by publishing a book about his crimes and making a profit thereby. His book was entitled “Runaways, Ramblers, and Rascals”.

Canadians were generally horrified enough by the crimes, and were outraged by the police treatment of Olson. Few could believe their ears about the ninety thousand dollar trust fund. Fewer still could fathom his ability to use the system and publish his book about the crimes.

Using the sets degree symbols that we have studied so far I have endeavoured to highlight the most outstanding. No doubt we will return to this chart with other degree associations at a later date. The readers are also challenged to explore these degrees further on their own. They are invited to respond by letter or at one of our monthly NCGR -Toronto meetings.

 11°(Sepharial) A roll of parchment, sealed and lying across a sceptre.  This is the index of a person who is born to occupy positions of trust and responsibility, most probably in connection with the Ministry, or in a minor degree occupying some office in Government service. The sealed parchments show diplomacy a taciturn disposition and ability to keep secrets  and confidences. The life-work will be carried on under conditions which require great secrecy and caution. The nature is reserved and self-reliant. He will rise to positions of authority, and will serve his country and king. It is a degree of AUTHORITY.

Sepharial’s interpretation has some uncanny associations. The children initially trusted him enough to have a drink with him. His ability to use his secret knowledge to his advantage in dealing with the police and the courts borders on genius, …… insidious genius, …….. certainly not stupid!

Alan Leo’s comments also appear astute. Hard and grasping is obvious. Perhaps the concept of purification through love would reveal some of his inner belief? It cannot be argued that he did not provide for his own!

—  12° (Charubel) A man with a bow in his hand; but he has no arrow. A person of splendid parts and excellent abilities, but who is ever unfortunate in being deprived of the means of effecting his purpose. When an opportunity presents itself, he finds himself unable to turn it to advantage.

—  12°(Sepharial) A fair woman looking at her face in a hand-glass. It denotes a person of a frivolous and lighthearted disposition, improvident and foolish, neither regarding the future or profiting by the past: laughing in the face of fate, and closing the eyes to experience: self-centred and worldly. The native will come by much misfortune, but will flaunt his colours to the end of a foolish career. It is a degree of FOOLISHNESS.

— 12° (Alan Leo) A gentle and retiring nature, full of sympathy: confinement through ill-health.

Charubel with his comment, “Deprived of the means to effect his purpose” could throw insight into his violence and rage.

Sepharial points to “neither regarding the future or profiting by the past” but Olson seems to have carried out both cleverly. He certainly did “laugh in the face of fate” and in the face of Canadians. Meeting misfortune and flaunting his colours to the end of a foolish career is outstandingly appropriate.

Alan Leo seems to be the furthest off in implying a gentle and retiring nature.

– 16° (Charubel) A man wading through mud knee-deep. The opposite bank towards which he is struggling is enveloped in fog.  Denotes a hard life, a struggling life, a life bestrewn with the wrecks of perished hopes and abortive speculations, the final one of all being a plunge into the dark.

The third place (the line for 15° to 16°â) in this hexagram deserves reading. It suggests that every step leads into danger and that escape is out of the question. One must wait until a way out shows itself!

Charubel here seems to hit the personal outlook on life right on. It seems to reveal a desperate kind of logic or personal belief.

The I Ching hexagram for this degree is also blatantly apparent and deeply insightful.